SINGAPORE (REUTERS) - As images of North Korean leader Kim Jong Un strolling by revellers at a rooftop bar the night before an unprecedented meeting with President Donald Trump circulated around social media sites, US citizens started asking, "Where is Singapore?".

Singapore, the tiny South-east Asian city-state that played host to nuclear talks earlier this week, was the most searched term on Internet search engine Google in the United States on Monday (June 11), with more than two million hits.

Related searches during those 24 hours included "Where is Singapore", "Singapore summit" and "time in Singapore".

Blanket media coverage on Monday included Kim's surprise tour of the iconic Marina Bay Sands hotel and its surrounding gardens, and the first hours of the meeting with Trump in the resort island of Sentosa.

Singapore said it spent S$20 million on the summit, a figure that drew the ire of some citizens. However, marketing experts say the coverage generated from the event could be worth more than 10 times that.

"It places Singapore on the map for international audiences," said Oliver Chong, executive director for communications and marketing capability at the Singapore Tourism Board. 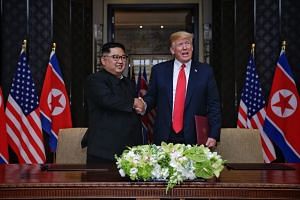 Singapore may have gained over $700m in exposure as host of Trump-Kim summit: Analyst Meltwater

But just months ago, lifestyle magazine Time Out ranked Singapore among the world's least exciting cities.

Andrew Darling, chief executive and founder of communications agency West Pier Ventures, said it would cost more than S$200 million to generate the kind of publicity Singapore has received so far by hosting the summit.

Media intelligence firm Meltwater said the coverage over the three days around the summit equated to US$270 million (S$360.5 million) of advertising, while the month leading up to it was worth US$767 million.

"The Trump-Kim summit has arguably been the single most important event that brought Singapore to the attention of most people around the world," said Jason Tan of media advertising agency Zenith Singapore.

"For many Asians, Singapore as the choice of destination reinforces our image as an efficient and safe country. For Americans who might not be as familiar with Asia, the summit definitely brought Singapore into the global spotlight."

Still, even some who should know better struggled to accurately place Singapore - known as the Little Red Dot, in reference to its depiction on a map.

The US State Department mistakenly made Singapore a part of neighbouring Malaysia in a note issued in connection with the summit, drawing a slew of snide comments on social media.