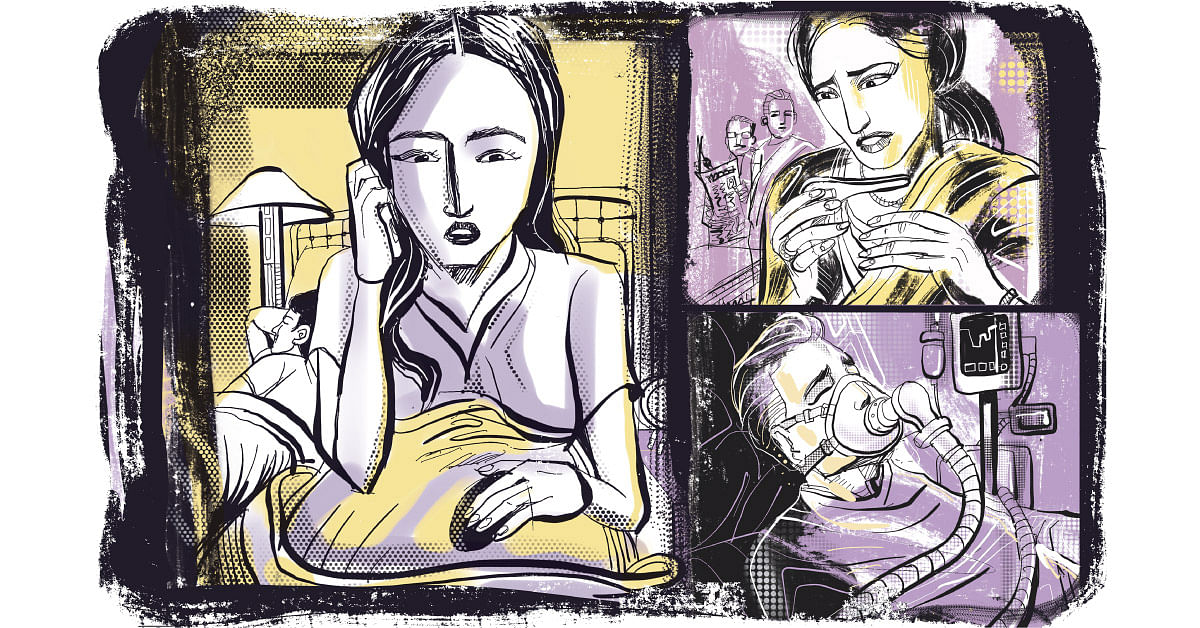 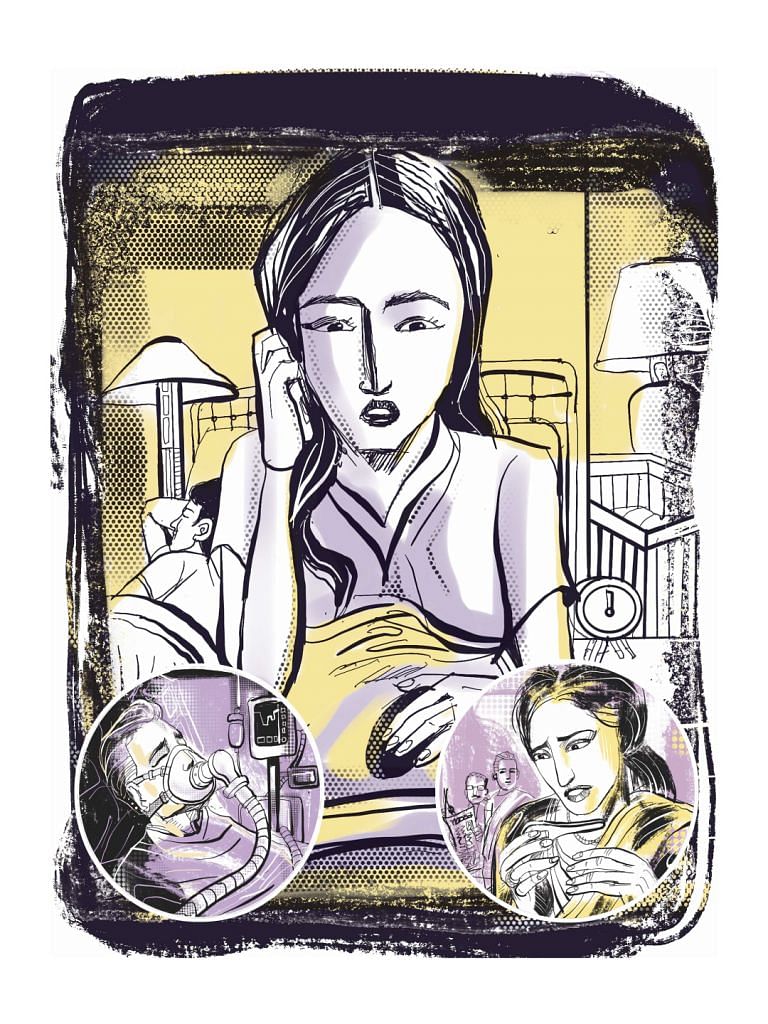 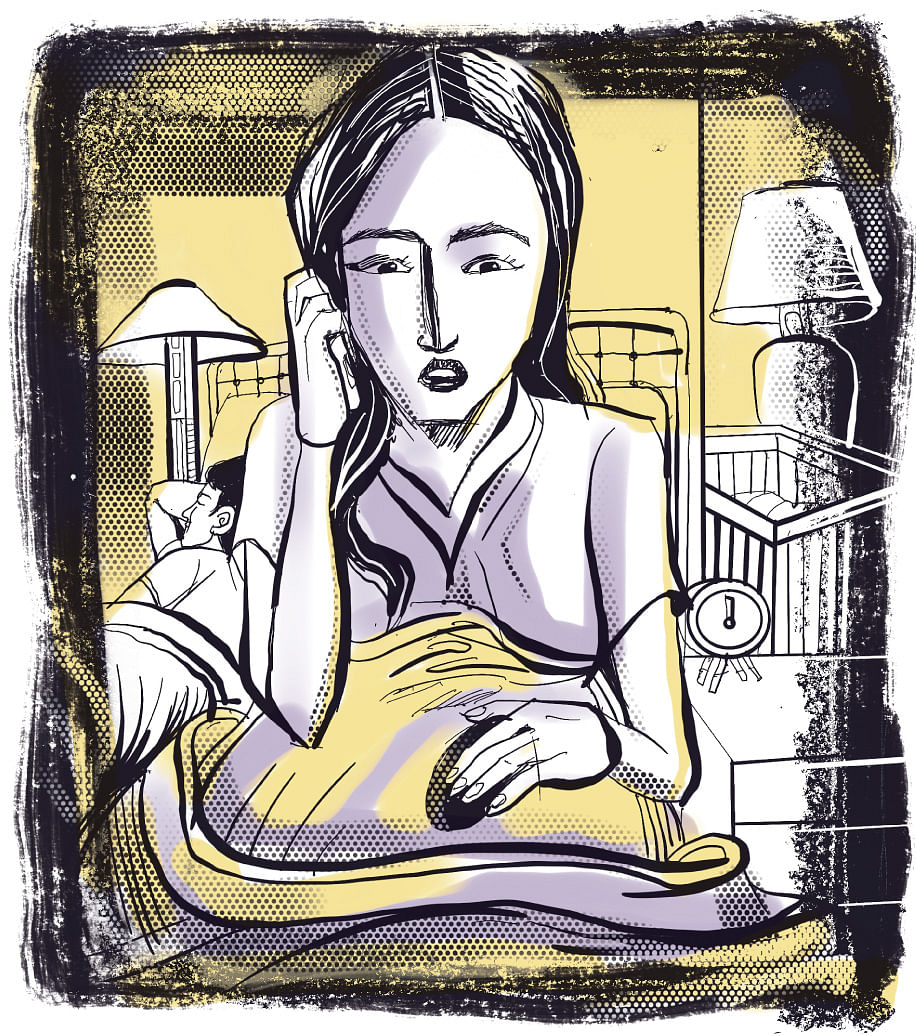 Six hours before Ms Poh Wen Ching was due to undergo a caesarean section for the birth of her second child, she got a call at midnight delivering some bad news.

A routine pre-admission test at Thomson Medical had found her and her husband positive for Covid-19, derailing their plans to deliver the baby girl on Sept 23.

The couple also have a two-year-old daughter.

Initially, I thought it was a joke. She panicked. I saw tears coming from her eyes... I woke my entire family up.
Mr Lee Shao Hao
Ms Poh’s husband

They live with his parents, who are fully vaccinated.

Ms Poh, an accounts executive, had decided to get vaccinated only in August – about six weeks before she was due to give birth – after reading an article about a pregnant woman in Malaysia who had died of Covid-19. The 29-year-old had both doses before she tested positive.

“Everyone told us not to do it. A lot of people said she should finish the confinement, then go for it, since she was already near the end of her third trimester,” recounted Mr Lee, 32. “But for us, our question was: ‘What if we don’t take it and something happens?’”

They also looked up articles on whether vaccination was safe for pregnant women, and consulted their gynaecologist who gave them the green light.

Throughout the course of Ms Poh’s pregnancy, the family took extreme precautions to keep themselves safe. These included taking showers immediately after coming back from running even simple errands, such as collecting letters or buying food.

After the couple were found to have the virus, the rest of the family got themselves tested.

They ended up testing positive, but experienced only mild symptoms that subsided after three days.

Their daughter – the only one not vaccinated because of her age – had a fever that lasted five days, as well as a cough and runny nose that persisted for around 10 days.

In the 48 hours after that midnight call, the family barely slept as they waited for confirmation on what would happen next. At the time, the home recovery programme, introduced as a pilot scheme on Aug 30 and expanded to more patients on Sept 15, was still new and plagued by some issues.

If mum gets Covid-19, will the unborn baby get it too?

Ms Poh was eventually taken alone to KK Women’s and Children’s Hospital (KKH) on Sept 24, as the Health Ministry requires women in her situation to either recover at home or be taken to a public hospital. The caesarean section was carried out on Sept 28, after doctors determined she was no longer infectious.

Although she was allowed to hold the newborn, the rest of her family could meet her only after Oct 2, when their 10-day quarantine was over. Mr Lee was also quarantined at home.

The baby was not tested for Covid-19 as KKH told the family there was no need for it.

“Vaccination for pregnant ladies is very important,” said Mr Lee, who is co-founder of media site Sure Boh Singapore. “It’s really very fortunate that we went ahead to do it.”

He urged others to mentally prepare themselves to deal with Covid-19, adding that much of his initial fear arose because he had not done so.

“For the first 24 hours, I was at a loss,” he recalled. “If you prep for it, it will be shocking – but not to the extent that you don’t know what to do and develop severe anxiety.”

He also hopes that his experience will help reduce the stigma of being diagnosed with Covid-19.

His father, a mechanic, had clients cancel on him even after he had recovered, as they were afraid of contracting the virus. His older daughter was also allowed to return to school only around 20 days after being infected with the virus, as a precautionary measure.

“There’s a social stigma. If you test positive, people look at you differently,” added Mr Lee. “A lot of people are still very afraid... We have to be careful, but we don’t have to be so afraid – we have to know what to do.”

• Over 85% of pregnant women who are hospitalised due to Covid-19 are not fully vaccinated.

• About 20% of this group required oxygen supplementation, while 10 per cent required high dependency and intensive care.

• As at Oct 1, no vaccinated pregnant woman has required oxygen or intensive care. 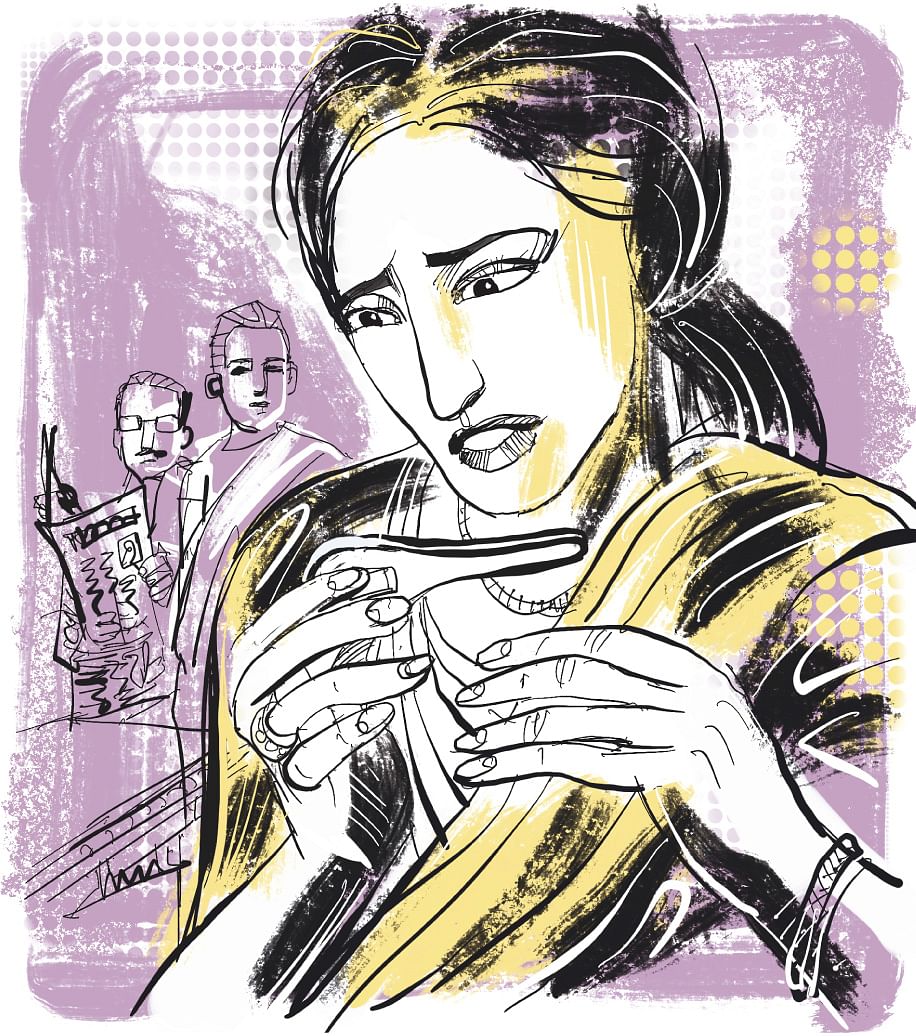 When Madam Umma, 50, came down with a fever on July 7 – two days after her first dose of the vaccine – she assumed it was just a side effect of the shot.

But over the next few days, as her family members began developing a fever one after another, she knew something was wrong.

The housewife’s household of nine tested positive for Covid-19. Only her fully vaccinated 92-year-old father was spared. “At that time, the number of community cases was very low, in the single digits,” said Madam Umma, who declined to give her full name. “So when we got it, we were very shocked.”

The family – most of whom were either unvaccinated or partially-vaccinated – ended up in different hospitals. This was before the home recovery programme was implemented.

Madam Umma, along with her husband, mother and son-in-law, spent most of their recovery time in the National Centre for Infectious Diseases. Her two grandchildren – aged five and three – were taken to KK Women’s and Children’s Hospital, along with their mother and domestic helper.

Meanwhile, her father was taken to a hotel for quarantine.

All their symptoms were relatively mild, with most of the family experiencing only a fever that faded after a day. The children were asymptomatic.

At home with Covid-19: My 10 days of recovering from the virus

Madam Umma herself experienced a four-day fever, and was hospitalised for eight days before being moved to a community recovery facility.

The experience left her on edge for a month, even after she had physically recovered.

In hospital, she asked to share a room with her 80-year-old mother, who was fully vaccinated, for emotional support. After her discharge, she avoided reading any news about Covid-19, and developed a fear of being reinfected.

“If I used hot water to wash myself and my body felt hot after that, I would take my temperature to see if I had a fever. Even if I sneezed because of dust on the floor, I would be scared,” she recounted.

I had a bit of a phobia... even small things made me anxious.
Madam Umma

Madam Umma’s mental health has since improved. She plans to take a second dose of the vaccine as soon as she is medically cleared to do so, and urged those who have not gotten their shots to do so.

“Previously, I was a very brave person. Whenever anyone had problems, they would come to me and I would calm them down. But when it came to Covid, it was like I was the most cowardly person.

“My mother, who was vaccinated, was strong and confident nothing would happen. But because I was not fully vaccinated, I was more worried.”

• If proper precautions are taken, the level of household spread is less than 10 per cent compared with what Singapore is seeing in other settings, said Mr Dinesh Vasu Dash, the Health Ministry’s group director of crisis strategy and operations.

• An English study published in April also found that infected people who had taken just one dose of the Pﬁzer or Astra Zeneca vaccines were between 38 and 49 per cent less likely to transmit the virus to their household contacts, compared with those who were completely unvaccinated.

Hooked up in ICU 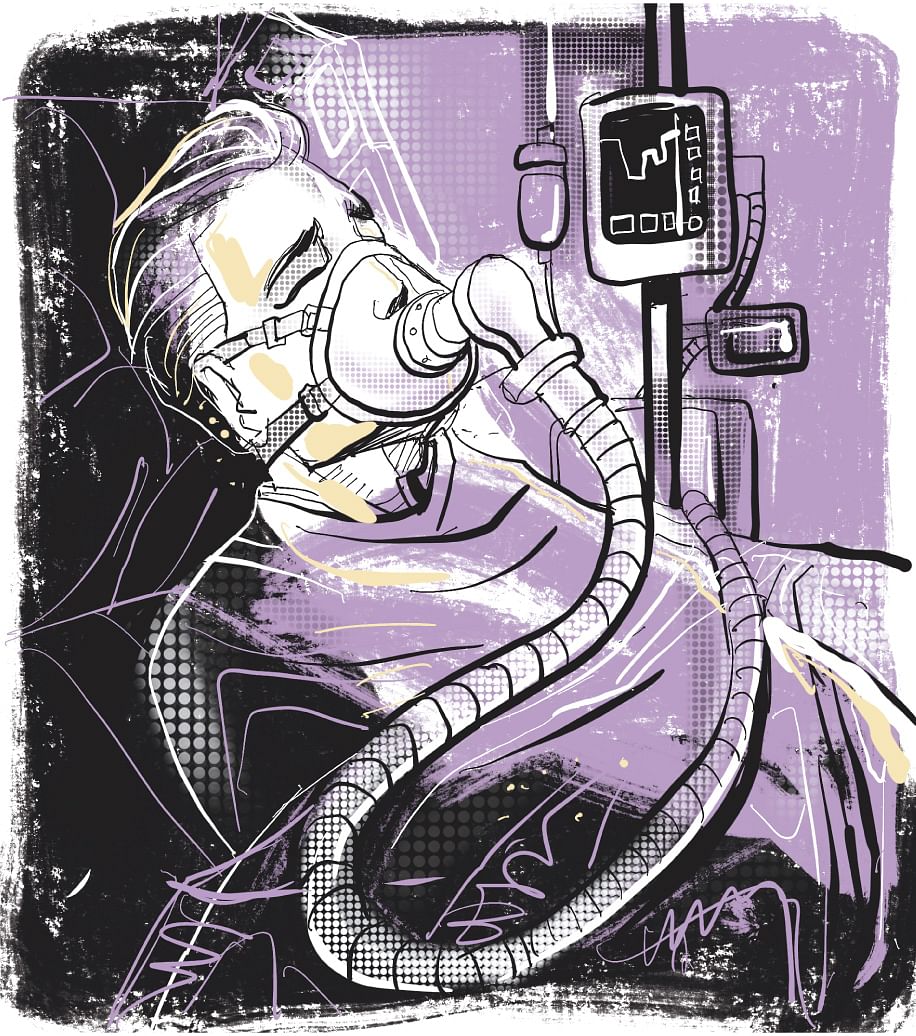 Four days after testing positive for Covid-19, Mr Ng was in the National Centre for Infectious Diseases’ intensive care unit (ICU), hooked up to a tube of high-flow oxygen to help him breathe.

The 60-year-old’s blood oxygen level – which in a healthy person should be at least 95 per cent – had fallen to below 90 per cent.

But the medical issues the virus created had crept up so stealthily that Mr Ng missed the signs that he was in serious trouble.

“They said I was breathing heavily, which I myself did not know,” said Mr Ng, a stallholder at Chinatown Complex, which was closed for three days in early September after a virus cluster was found there. “I sort of sensed it, but not to the extent that I found difficulty in breathing.”

I didn’t know I was breathing hard.
Mr Ng
Stallholder at Chinatown Complex

He had tested positive after a routine swab test on Sept 10, and called an ambulance the next day. After two days in the hospital’s general ward, he was transferred to intensive care.

Mr Ng, who wanted to be known only by his surname, said he was conscious at the time, and still did not have difficulty breathing – just some “discomfort”.

But the decision to move him made his family members very anxious, he recounted.

“When they heard the word ‘ICU’, they thought it must be very serious,” he said. “They saw me wearing the (breathing apparatus) mask and were very worried.”

He was not able to give them regular updates due to his worsened condition.

“I didn’t talk to them much. I was very tired and sleeping most of the time,” said Mr Ng, who otherwise texted or spoke to his family on the phone.

Mr Ng spent three days in the ICU – a relatively short time, given that some patients require intensive care for more than two weeks. Doctors believe he was protected from the worst effects of the virus because he was fully vaccinated.

ICU v isolation for Covid-19 patients: What do the terms mean?

Approximately 1.5 per cent of patients need oxygen supplementation in hospital for two to five days, while another 0.2 per cent end up needing critical care.

An Israeli study has also shown that people over 60 who had received their booster shots were about 20 times less likely to have severe Covid-19, compared with those in the same age group who had received only two jabs at around the same time period.

Apart from supplementary oxygen, Mr Ng was given a cocktail of medication: antiviral drug remdesivir, a steroid called dexamethasone and a blood thinner as some Covid-19 patients are at risk of blood clots.

He was then moved back to an isolation ward before being discharged on Sept 24.

Mr Ng spoke warmly of the healthcare staff who looked after him despite the onerous protocols they had to abide by.

Each time someone entered his room – even if it was just to take his temperature or tidy the place – they would have to don a fresh set of personal protective equipment.

“And when I was in intensive care, once my oxygen levels dropped off, they would quickly come into the room, so I believe they are truly monitoring every patient,” he added.

• Some 0.2% of all Covid-19 patients become critically ill and require ICU care.

• But only one in three ICU patients is fully vaccinated.

• Unvaccinated people are nearly 14 times more likely to become critically ill or die, compared with those who have been vaccinated.