SINGAPORE - Defence lawyer M. Ravi's application for the High Court to determine if the Singapore Cabinet has the same protection under the Constitution as an individual has been thrown out by a district judge.

On the first day of the trial on Wednesday (Nov 27), the lawyer raised a question on whether the phrase "the reputation of such person" under section 499 the Penal Code - which pertains to defamation - is applicable to the Cabinet, a governmental body.

Arguing that since the Cabinet is not a person, Mr Ravi said its right is not protected under Article 9 of the Constitution, which states: "No person shall be deprived of his life or personal liberty save in accordance with law."

Therefore, he said, the Cabinet does not have a reputation to protect.

His application for the question to be addressed in the High Court was rejected on Wednesday by District Judge Christopher Tan, who said that the matter "does not merit" a referral to the High Court.

De Costa, 36, is accused of one count each of criminal defamation and using a computer to perform an unauthorised access to another man's e-mail account. He allegedly committed these offences on Sept 4 last year.

The Singaporean allegedly sent to TOC an e-mail titled "PAP MP apologises to SDP". He is said to have defamed members of the Singapore Cabinet in the e-mail, which stated there was "corruption at the highest echelons".

According to court documents, De Costa allegedly intended for the contents of the e-mail to be published on TOC. 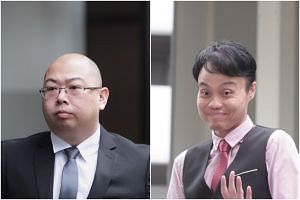 On Wednesday, Mr Ravi told the court that the charges against his client are unlawful and "the government has no right to sue for defamation".

He told Judge Tan: "The question raises important and novel constitutional questions that have wide implications on the rights of private citizens to freely criticise the government without being liable for criminal defamation, and this question deserves the attention and treatment before High Court."

The lawyer also referred to the Derbyshire principle which is linked to a legal case in the United Kingdom between Derbyshire County Council and Times Newspapers.

The case has laid down the principle in common law that a public body is barred from suing a citizen for defamation because this would discourage free speech.

Deputy Public Prosecutors Mohamed Faizal, Shivani Retnam, Ho Lian-Yi and Sheryl Yeo stated in their submissions that the defence's arguments were "entirely without merit" and urged the court to dismiss the application.

Stressing that the defence's question does not concern the interpretation of the Constitution, they added: "The courts are in fact alive to the fact that individuals like De Costa are often incentivised to 'disguise' a question that has nothing to do with the Constitution as one of constitutional import by tacking on a reference to a constitutional provision in the question posed.

"It is precisely for that reason that the courts have taken pains to stress the fact that a mere assertion or allusion to a contravention of a provision of the Constitution would not suffice."

Furthermore, De Costa had been charged over his defamatory statement concerning members of the Singapore Cabinet, and "the members of the Cabinet are clearly natural persons", stated the DPPs.

The court heard that De Costa had stated that no one but natural persons has a reputation to protect.

The prosecutors said that this chain of reasoning is "fundamentally flawed" and that "it may amount to defamation to make an imputation concerning a company, or an association of persons as such".

Whether or not the Cabinet can be defamed as a person, as Mr Ravi had contended, would have "absolutely no bearing" on the case against De Costa, the prosecutors had told Judge Tan.

Following the judge's decision, Mr Ravi said that he will be filing a criminal motion in a week and will be making a similar application at the High Court.

He told The Straits Times: "I am somewhat surprised that the court accepted the prosecution's position that individual Cabinet members are distinct from the Cabinet as an entity.

"This is somewhat disturbing, that those like ministers who exercise governmental authority are artificially distinguished as government or Cabinet as such."

The trials involving De Costa and Xu are expected to resume in January next year.