SINGAPORE - Two full-time national servicemen (NSFs) with the Singapore Civil Defence Force (SCDF), who were at the scene of last year's fatal training accident between a Bionix Infantry Fighting Vehicle and a Land Rover, snapped pictures of the tragedy and unlawfully disseminated them via WhatsApp.

Another two men shared the pictures with others.

On Monday (Dec 2), Muhammad Arif Azman, 22, who held the rank of Corporal in the SCDF, was fined $3,000 after pleading guilty to two charges under the Official Secrets Act (OSA).

Brandon Tan Jien Jet, 21, and Muhammad Zaki Haji Mokhtar, 24, were each fined $1,500. They had pleaded guilty to one charge under the OSA.

Corporal First Class (CFC) Liu Kai, a 22-year-old NSF with the Singapore Armed Forces, was killed in the accident on Nov 3 last year.

A transport operator from SAF's Transport Hub West, he died after the Bionix mounted the Land Rover that he was driving at the Murai Urban Training Facility.

The court heard that Tan was an SCDF NSF holding the rank of Sergeant 1, while Zaki had already completed his NS at the time.

The OSA-related cases involving two other men, who were then serving their NS with SCDF, are still pending.

The duo are Mohamad Haikal Mohd Zainal Abiddin and Thng Yu Xuan, both 21.

All five men, who were attached to Jurong Fire Station, have since completed their national service.

Deputy Public Prosecutor Angela Ang told the court on Monday that Arif, Haikal and Thng were sent to the accident site at around 10.20am to help extricate CFC Liu.

The SCDF officers returned to Jurong Fire Station at around 2pm.

Court documents show that Arif and Haikal sent the photographs to a WhatsApp chat group with 24 present and former SCDF personnel of the fire station. 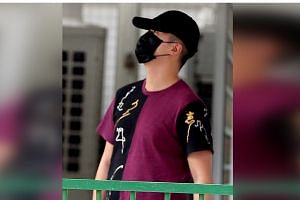 SAF captain charged over death of NSF Liu Kai; 5 others charged with leaking photos of incident

After receiving the seven photographs, Tan forwarded two of them to another WhatsApp chat group comprising six other friends.

Meanwhile, Zaki forwarded two of the pictures to his brother, who was curious about the accident.

At about 4pm the same day, the commander of Jurong Fire Station, Captain Dinesh K. Verlachamy, received information from an SCDF public affairs officer that a photograph of the accident site was circulating on WhatsApp.

Capt Dinesh conducted interviews to ascertain how the photograph was leaked.

DPP Ang said Arif and Haikal were identified as having taken and circulated the pictures.

Capt Dinesh then directed all SCDF personnel at Jurong Fire Station to immediately delete all photographs of the accident scene.

Arif did not comply. When his phone was seized in November last year, a forensic examination found it still had photographs of the accident.

Anyone convicted of an offence of wrongful communication of official information is liable to a fine of up to $2,000 and two years in jail.

Separately, on Oct 25 this year, an SAF officer was charged in court over CFC Liu's death.

Court documents say he had allegedly failed to keep a safety distance of 30m between the Land Rover and the Bionix, which had reversed and mounted the driver's side of the Land Rover.

Ong's pre-trial conference will be held on Dec 23.