SINGAPORE - A lorry driver charged last year with causing the deaths of three pedestrians near Yio Chu Kang MRT station was temporarily let off the hook on Thursday (Oct 3), pending the outcome of a coroner's inquiry into the deaths.

Xu Kai Xiang, 27, was granted a discharge not amounting to an acquittal for causing the fatalities by driving dangerously along Ang Mo Kio Avenue 6 towards Marymount Road at about 9.30am on April 23, 2018.

A discharge not amounting to an acquittal means that Xu can still be prosecuted for the offence later, depending on the evidence that emerges.

He is expected to plead guilty to these two charges when his case is mentioned again on Oct 14.

Xu was originally accused of failing to have proper control of the lorry, causing the vehicle to mount the kerb and hit the railings before surging forward and ploughing into the three pedestrians. 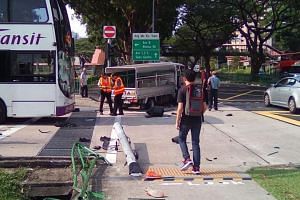 'It was so sudden, it could have been me': Teen's close shave with death

The lorry was said to have continued surging forward before it hit a stationary SBS bus at the entrance of Yio Chu Kang bus interchange. It then veered to the right and hit a bollard, coming to a stop.

Xu was injured in the accident and had to be charged in hospital.