SINGAPORE - Straws and a meth-stained syringe found on Singaporean doctor Ler Teck Siang by narcotics officers had been meant for “arts and crafts” projects such as folding an origami star, Ler told a court on Friday

The items were discovered in Ler's bag when he and tutor Sim Eng Chee were arrested on March 2 last year after drugs and drug-related item were found in Sim's hotel room.

Ler, 38, is accused of injecting illegal drugs into Sim - a service known as "slamming" - and faces another charge of possessing drug utensils.

Taking the witness stand on the fifth day of his trial, Ler told the court that the straws were to be folded into an origami star and a dog figurine, and he had intended to dispose of the syringe but forgot about it for six months.

He claimed the straws and syringe were taken from the study room of his former partner, American Mikhy Farrera-Brochez, 34.

Ler is serving a two-year sentence for helping the HIV-positive Farrera-Brochez dupe the authorities into allowing the American to work here. Both men are also at the centre of the HIV Registry data leak scandal.

Sim had earlier testified to frequently hiring Ler for his slamming services, and had typically done so ahead of having sex with other men.

But Ler denied this on Friday, and said that he provided "health advisory services" to Sim, including sports massages, prostate massages, and a wound-dressing service. 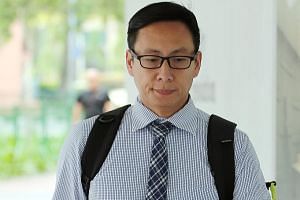 The duo at the centre of HIV Registry leak: Who are Singaporean doctor Ler Teck Siang and US fraudster Mikhy Farrera-Brochez?

They met in August 2017, when Sim contacted him via gay dating app Grindr.

"He told me he was going to meet a sex buddy after I'm done... and he wanted an urut batin to enhance libido... so I told him I had some experience doing prostate massage,"said Ler, using a Malay term for the massage.

It was similar to the prostate examination he had done as a doctor, said Ler, adding that it was a "good chance" for him to practise as he had not done it for a long time.

The massage services and planned arts and crafts projects were his two methods of supplementing his income, said Ler, as he was not sure if he could renew his doctor's practising certificate in the light of the court proceedings against him for his cheating-related offences.

Later on, Ler said he told them that he used it to dislodge food particles in his teeth, a practice that he learnt from Farrera-Brochez.

"Subsequently when results (from the Health Sciences Authority) came back... I remembered that I recovered this syringe from the study room of my ex-partner," said Ler.

He said he had meant to dispose of it in a sharps box when he went to a clinic for work, but "completely forgot about it".

The straws were also obtained from Farrera-Brochez's study, said Ler.

During his cross-examination, Deputy Public Prosecutor Nicholas Wuan asked Ler if he agreed with the proposition that Farrera-Brochez would not have left the syringes lying around if the American man had HIV.

Ler replied: "I have no information to answer that."

DPP Wuan also questioned Ler about the contents of his text messages with Sim, some of which mentioned “G water” .

Sim had earlier testified this to be a substance that enhanced the effects of drugs, and said he gave Ler “G water” in exchange for “slamming” services.

On Friday, Ler countered that “G water” was the name of a “virtual potion” in a game that he could not remember the name of.

DPP Wuan said: “I put it to you that your entire story about G (water)... are all lies.”

He further added that Ler had not made a single mention of his alleged massage services in his statements to the Central Narcotics Bureau (CNB) officers .

“I put it to you that the defences you have raised in your statements to the CNB are after-thoughts,” said DPP Wuan.

Farrera-Brochez is accused of leaking the contacts and details of 14,200 HIV-positive individuals - information that he accessed through Ler, the former head of the National Public Health Unit. He is currently on trial in the United States for charges related to the data leak.