SINGAPORE - Tala Alamuddin Le Tallec, the sister-in-law of Hollywood movie star George Clooney, has been sentenced to three weeks' jail and a fine of $6,400 for various traffic offences, including drink driving.

Le Tallec, 47, will also be disqualified from driving for four years after her release.

The Singapore permanent resident, who is the sister of human rights lawyer Amal Clooney, pleaded guilty on Monday (Oct 14) to drink driving, using a car without a Singapore Class 3 driving licence, and driving without insurance.

A fourth charge of taking the vehicle, which belonged to her husband, without the owner's consent was taken into consideration during sentencing. This carries a fine of up to $1,000 or jail term of up to three months.

If her husband had given consent to her use of the car, he may also be liable for the offences as the owner of the vehicle under the Road Traffic Act.

The court heard that on the night of May 13 this year, Le Tallec drove her husband's BMW X5 to a restaurant in Dempsey Road, where she had two glasses of wine and a glass of champagne.

While driving home with a friend in the front seat of the car, she was stopped at a police roadblock along Holland Road towards Ulu Pandan at around 2.30am the next day.

When she stopped the car, Staff Sergeant Alvin Lee noticed that Le Tallec appeared to have difficulty finding the car's handbrake.

He also observed that Le Tallec smelled strongly of alcohol and could not answer his question promptly when he asked her where she had driven from, said Deputy Public Prosecutor Magdalene Huang.

Le Tallec also accidentally stepped on the accelerator pedal while reaching for her bag in the rear passenger seat to retrieve her driving licence, and Staff Sgt Lee quickly alerted her to it, DPP Huang added.

Le Tallec subsequently failed a breathalyser test at the roadblock, and was arrested. 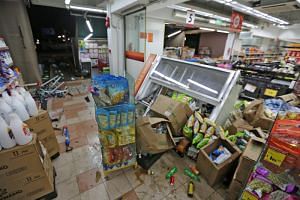 She was taken to Central Police Division for a breath-analysing device test at about 4.20am.

This is Le Tallec's second drink driving conviction in Singapore. Her first offence was in 2013, which saw her disqualified from driving for two years.

However, she did not reapply for a Class 3 driving licence in Singapore after that, said DPP Huang.

Le Tallec also faced other traffic-related offences, specifically for careless driving in 2010 and inconsiderate driving in 2004, the court heard.

For the drink driving charge, DPP Huang urged District Judge Lorraine Ho to sentence Le Tallec to three weeks' jail, a fine of $5,000 and to disqualify her from driving for three years.

Calling for a deterrent sentence, DPP Huang said Le Tallec does not have a clean driving record.

She also highlighted that Le Tallec's ability to drive had been impaired as she had difficulty finding the handbrake and had accidentally stepped on the accelerator while her vehicle was stopped at the roadblock.

He added that the mother of four realised she had made a terrible mistake, and has been suffering the consequences from the "unwarranted publicity (of her case) for reasons beyond her control".

According to previous media reports, Le Tallec was an events planner before she started her own fashion line, Totally Tala.

She lived in New York City before marrying a businessman based in Singapore, but reportedly later remarried an Italian businessman.