SINGAPORE - Already facing a jail term, former City Harvest Church (CHC) leader Chew Eng Han, 57, was hit with an additional charge in court on Thursday (March 29). He is now accused of attempting to intentionally defeat the course of justice by boarding a boat to leave Singapore to avoid serving his sentence.

According to court documents, he allegedly boarded the vessel at a Pulau Ubin jetty at around 8.30am on Feb 21 - one day before he was supposed to begin serving his jail term of three years and four months for his role in the misuse of church funds to the tune of millions of dollars.

But officers from the Police Coast Guard caught Chew just minutes after he had embarked upon his alleged escape bid.

He was taken to court on Feb 22 and charged with leaving Singapore for Malaysia from the jetty, which is not an authorised place of embarkation or point of departure.

But Chew, who was out on $1 million bail, had secured multiple deferments.

Chew had originally been sentenced to six years' jail, but this was reduced to three years and four months by the High Court in April last year. The shortened term was upheld by the Court of Appeal on Feb 1, but Chew was allowed to defer his sentence until after Chinese New Year.

A day before he was supposed to start serving it, Chew was caught on a boat. Two men accused of helping him flee Singapore have also been charged in court. 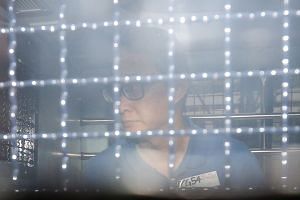 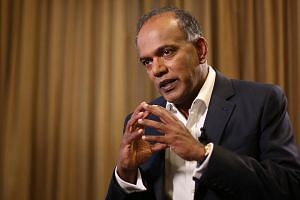 Malaysian Khoo Kea Leng, 45, who was hauled to court on Feb 28, is said to have conspired with Chew on Feb 20 to leave Singapore from an unauthorised point of departure.

Singaporean fish farm owner Tan Poh Teck, 53, was earlier charged with abetting the former CHC fund manager's attempt to leave Singapore by taking him on the boat to the north-east part of Pulau Ubin, where Chew was to board another vessel for Malaysia.

Tan is also accused of abetting one Shanker Maghalingam to leave Singapore on the same boat to Malaysia at about 8.40am on Dec 17 last year.

In addition, Tan was charged on March 7 with abetting one Goh Chun Kiat to leave Singapore by conveying him on a motorised boat from a beach near Changi, which is not an authorised point of departure.

According to court papers, the boat then travelled to an area near a fish farm off Pulau Ubin, where Goh allegedly boarded another boat to Malaysia. Tan allegedly committed the offence at around 9.30am on Aug 17 last year. Goh's details were not revealed in court papers.

On Thursday, the court heard that Khoo intends to plead guilty to his charge and he will be back in court on April 12.

The pre-trial conference for the cases involving Chew and Tan will take place on May 3.