SINGAPORE - An electric scooter rider was in court on Friday (March 16) after he allegedly knocked into a 45-year-old woman in Bedok Reservoir Road last week.

Muhammad Sha'if Jumadi, 23, was charged with causing grievous hurt while riding the device in a rash manner.

He was riding it in front of Block 151, Bedok Reservoir Road at 6.10pm on March 7 when he allegedly knocked into Ms Goh Lay Yong. She suffered severe head injuries as a result.

In a statement on Thursday, the police said that preliminary investigations revealed that Sha’if is said to have collided into Ms Goh as he was unable to stop his e-scooter in time.

He allegedly fled the scene after calling for an ambulance.

The police said: "Through extensive ground enquiries, and with the aid of footage from police cameras, officers from Bedok Police Division established the identity of the suspect."

They arrested him in Bedok North Street 3 on Wednesday.

If convicted of causing grievous hurt while riding the e-scooter in a rash manner, he can be jailed for up to four years and fined up to $10,000.

At least three other e-scooter riders have been hauled to court in the past week after they allegedly knocked into others, causing injuries. 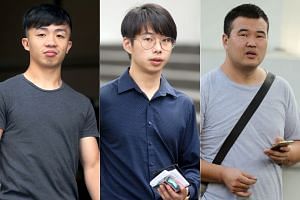 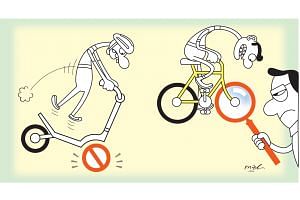 Qin, who is a logistics manager, was given the maximum fine of $2,500 later that day after he admitted injuring a nine-year-old boy on July 5 last year.

Qin was riding near a lift at the void deck of Block 607, Clementi West Street 1 when he hit the child, who suffered small abrasions on his right elbow, wrist and left knee.

Liu is accused of knocking into Ms Tay Poh Choon, 61, at Yishun Park Hawker Centre on Oct 19 last year. She suffered tenderness to the back of her head.

As for Toh, he was allegedly riding at an unsafe speed along a pavement near Block 549, Woodlands Drive 44 on Nov 14 last year when he knocked into an eight-year-old boy. The child suffered injuries, including bruises to his face. The cases involving Liu and Toh are still pending.

Offenders convicted of causing hurt by performing a negligent act can be jailed for up to six months and fined up to $2,500.

According to an earlier report in The Straits Times, 110 accidents involving e-scooters were reported in the first nine months of last year, and the Government is cracking down on reckless riders.

E-scooter users will have to register their devices from the second half of this year.