SINGAPORE - General practitioner Wee Teong Boo, 68, was cleared on Monday (Feb 25) of raping a patient in December 2015 after the High Court accepted medical evidence that the doctor was suffering from erectile dysfunction at the time.

“There is a reasonable doubt as to whether penile penetration could have taken place as alleged in this case,” said Justice Chua Lee Ming.

Instead, the judge convicted Wee of a charge of sexual assault by penetration - based on the GP's own admission that he had inserted his ungloved fingers into the victim, using his saliva as a lubricant.

This occurred during a late-night consultation at his Bedok clinic in December 2015.

Justice Chua rejected Wee's claims that he had done so to conduct an internal examination as he suspected the victim, then a 23-year-old student, could be suffering from pelvic inflammatory disease (PID).

Justice Chua noted that there was no mention of PID in the medical case notes. Wee claimed he did not write this down because he had two impatient patients waiting outside at the time, but this cut no ice with the judge.

The judge also rejected Wee’s explanations for not using gloves, proper lubricant and for not asking the patient if she needed a chaperone.

Wee claimed that he forgot these basic requirements because he was “caught off guard” by her complaint of a genital itch.

“I do not accept his explanation. The accused is a very experienced doctor with 37 years’ standing at the material time. His composure during cross-examination also showed he was not easily flustered,” said Justice Chua.

The judge noted that Wee was conscious of the need to use a lubricant and would have noticed he was not wearing gloves when his fingers were near his mouth.

Justice Chua added that Wee had no reason to carry out an internal examination without establishing the patient’s sexual history, which is part of the procedure. He cited expert opinion that an investigation for PID would would not start with a digital examination.

Wee was also convicted of a second charge of molesting the victim during an earlier consultation one month earlier. 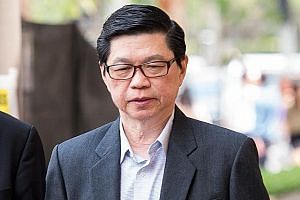 Sexual assault by penetration carries the same prescribed sentence as rape - jail of up to 20 years, with caning or a fine.

In any case, Wee cannot be caned as he is more than 50 years old.

Originally charged with one count each of rape and molestation, he had contested the charges, in a trial that began in April last year.

The woman, who cannot be named due to a gag order to protect her identity, was a regular patient at Wee's Clinic & Surgery.

She began seeing Wee in November 2014 for gastric and acne issues.

On Nov 25, 2015, she went to the clinic to consult Wee because of gastric discomfort.

She was told to lie down on the examination bed in the adjacent room for him to check her abdomen.

She said she unzipped her jeans as told, and during the examination, Wee stroked her genital area. She felt uneasy but did not voice her discomfort as she thought it was part of the medical examination

A month later, at about 11.30pm on Dec 30, she returned to the clinic to consult the doctor about frequent urination and an itch in her genital area.

As she lay on the examination table, the doctor then repositioned her such that he was between her legs.

She said she heard the sound of a zipper and felt something "poke" her and saw Wee's body moving. When she complained of pain, Wee repositioned her again.

The woman said it was then that she saw him with his trousers unzipped and realised he was raping her.

She said she gestured for Wee to stop. The woman said she got dressed and Wee spoke to her about the medicine he was prescribing for her.

At the clinic, she noticed she was bleeding after she went to the washroom.

When she returned home, she took a shower and washed her genital area with soap and water. She continued to notice bloodstains after using the toilet.

She told her mother what had happened at the clinic and made a police report later that same morning.

The woman soaked her underwear in a pail of water for at least 11 hours before it was removed by the police and sent for forensic analysis.

Tests on the underwear showed no traces of semen, with insufficient DNA detected.

Examinations done on the shirt, pants and underwear that Wee said he wore at the time, as well as on the examination bed, proved inconclusive as there were multiple sources of DNA.

During the trial, which ended in October 2018, medical evidence was submitted, with Wee's experts saying that he was suffering from erectile dysfunction and raising doubts about an earlier test, done in January 2016, which showed he was normal.