An ultrasound test for erectile dysfunction carried out on a general practitioner two weeks after a patient accused him of rape showed that he was normal.

However, Dr Peter Lim, the urologist who ordered the test in January 2016, told the High Court yesterday that he "strongly suspects" the result was in error, pointing to discrepancies with later tests.

Dr Lim was taking the stand in the continuing trial of Wee Teong Boo, 67, who is charged with molesting and raping a 23-year-old patient at his Bedok practice, Wee's Clinic and Surgery, in 2015.

The woman, who cannot be named because of a gag order, said Wee molested her on Nov 25 and raped her in the early hours of Dec 31.

On Jan 5, 2016, Wee consulted Dr Lim, who has a private practice at Gleneagles Hospital.

Yesterday, Dr Lim testified that on the first visit, Wee complained about having erectile problems for three years. Wee mentioned that he was implicated in a rape case only on a subsequent visit, Dr Lim added.

The urologist ordered an ultrasound, which shows how blood flows in and out of organs. The test was done on Jan 13, and a radiologist concluded the flow was normal. Three months later, Wee was examined at Changi General Hospital as part of police investigations. 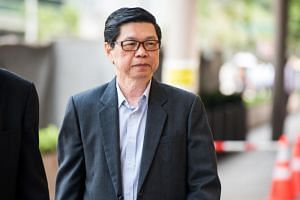 The same test was carried out, but the result showed that the blood flow on one side was half of what was normal. The report stated that Wee's penis was "flexible" at the best achieved erection.

Dr Lim later ordered a haemodynamic study, which he said was an objective test. The results this year said Wee had erectile dysfunction, and graded him 1, the lowest score on a four-point scale to assess erection quality.

Dr Lim said he suspected the result of the first test was wrong. He said an ultrasound was an "operator-dependent" test that was subject to interpretation. Extrapolating backwards, he said Wee would have had moderate erectile dysfunction in 2016. Dr Lim concluded that it would be possible, but very difficult, for Wee to have penetrative sex. The trial continues.