An account manager, who caused a traffic obstruction in Pasir Ris Drive 3 by cycling in the middle of a lane, deliberately damaged the left side-view mirror of a lorry when its driver tried to pass him.

British national Eric Cheung Hoyu then tumbled onto a nearby grass verge when the lorry hit him.

The incident last December was caught on a video that went viral.

Cheung, 35, who pleaded guilty to one count each of committing mischief and an offence under the Road Traffic Act, was fined $2,800 yesterday.

District Judge Marvin Bay said that Cheung should note that it is "inherently dangerous" and "extremely inconsiderate" to ride in the middle of the lane.

The court heard that shortly before the altercation, Cheung and his friend were cycling in the left lane of the two-lane Pasir Ris Drive 3 at around 11.45am on Dec 22 last year.

Cheung rode in the middle of the lane while his friend cycled closer to the kerb. 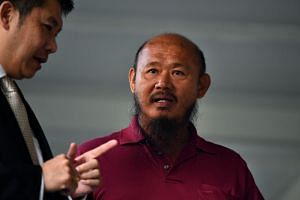 Online petition asking Traffic Police to return lorry involved in incident with cyclist gets over 3,000 signatures

Singaporean lorry driver Teo Seng Tiong, 58, was in his vehicle behind the pair at around the same time.

Deputy Public Prosecutor Gabriel Choong said that Teo tried to overtake Cheung by using the right lane but was unsuccessful due to other motorists on the road.

Teo and Cheung later stopped at a traffic light and moved off when it turned green.

The DPP said: "Cheung glanced twice at the lorry as he cycled closer to the kerb on the left, eventually coming abreast with the lorry. Cheung then raised his right hand and struck the lorry's side-view mirror, breaking off portions of the mirror which fell to the road."

Court documents stated that Teo then swerved his lorry to the left and collided with Cheung, who fell off his bicycle onto a grass verge.

The cyclist suffered cuts and bruises on his left side and his bicycle, which cost about $7,000, was damaged.

The court heard that Cheung caused $15 worth of damage to Teo's lorry and that the driver has refused to accept his offer of compensation.

Both men were charged in court on Jan 16.

Teo is now accused of acting rashly to cause hurt to Cheung by suddenly swerving his lorry to the left and colliding with the cyclist.

Teo was also charged with one count of failing to make a police report within 24 hours of the accident. His case is still pending.

Yesterday, defence lawyer Sarjeet Singh told Judge Bay that his client has been cycling in Singapore for seven years and has had a clean traffic record.

The lawyer said: "He seriously regrets his actions that day... he wants to assure the court that he will never do anything like that again."

For mischief, Cheung could have been jailed for up to a year and fined.