SINGAPORE - The prosecution in a case involving false claims to a government scheme has urged the court to sentence the mastermind of the scam to at least four years and two months' jail.

S. Chandran, an IT instructor turned magician, had helped 49 people submit fraudulent claims to the Productivity and Innovation Credit (PIC) scheme, seeking payouts totalling more than $1.1 million. Of this amount, $876,684 was disbursed by the Inland Revenue Authority of Singapore (Iras), which runs the scheme.

Chandran, 37, who was unrepresented, told District Judge Kessler Soh in his mitigation plea that he is the sole breadwinner of his family and is now "penniless". He also said that his parents have health problems.

Chandran, who is married and has a young son, told the court that he would not know what would happen to his loved ones if he were sent to jail.

He pleaded guilty in November last year to 18 charges under the Income Tax Act involving more than $400,000 in cash payouts and bonuses. Forty other similar charges linked to the remaining amount were taken into consideration.

The PIC scheme offers tax deductions or cash payouts to companies that have made genuine investments to enhance productivity and innovation, such as by investing in staff training, information technology or automation equipment. 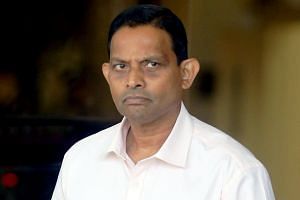 Fine, $49k penalty for lawyer involved in scam to defraud the Government

A fine balance on grants

To qualify for PIC cash payouts, the companies have to meet certain conditions, such as hiring at least three local employees.

Some companies which did not meet the conditions had sought help from Chandran, the sole proprietor of Paradize Consultancy, who assisted them in exchange for half of the amounts disbursed.

DPPs Jesudevan and Christopher Lim, as well as Iras' senior tax prosecutor Norman Teo stated in their court documents that Chandran "held himself out as a PIC consultant".

He used platforms such as social media to seek out interested parties, claiming he could assist to "claim government grants and get some cash back".

He also organised individual and mass presentation sessions on how to obtain the PIC cash payouts. On the claimants' behalf, he would submit to Iras the necessary paperwork such as the PIC form.

For claimants who did not have three local employees, Chandran directed them to obtain the particulars of other individuals and list them as workers in the PIC forms.

Some of the claimants have already been dealt with. On May 26 last year, eight Singaporeans were ordered to pay a penalty of between $24,606 and $49,212 for making false PIC claims. Most were also fined up to $5,000.