Police reveal figures, reiterate prosecution of 1st-time offenders is based on several factors

Five students from the National University of Singapore (NUS) were jailed for sexual offences during the academic years from 2015/16 to 2017/18, and given jail terms of between 10 days and eight months.

The police revealed this yesterday in a statement to clarify figures reported in The Straits Times.

Last Friday, ST executive sub-editor Toh Yong Chuan and senior correspondent Tan Ee Lyn wrote columns on the case of NUS student Monica Baey, who recently made public her experiences after being filmed by a male student while she was taking a shower at a hall of residence last year.

Ms Baey, 23, felt that the perpetrator, fellow student Nicholas Lim, 23, had been let off too lightly and that NUS did not do enough to help her overcome the trauma of what happened.

Mr Lim was given a 12-month conditional warning after the case was reported to the police, and other penalties imposed by NUS, including suspension for a semester.

Mr Toh’s commentary was titled “How an undergrad challenged NUS’ policy on sexual misconduct”, and Ms Tan’s was “Monica Baey was my student and I’m proud of her”.

Based on information available on NUS’ students’ portal, the two commentaries reported that 26 cases of sexual offences were brought before the NUS Board of Discipline, which determines violations under NUS’ policies and code of conduct, during the academic years from 2015/16 to 2017/18. 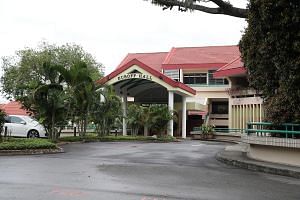 Sexual misconduct on campus: How can NUS make things right?

Sexual offences in an age of technology

Ms Tan also wrote that 16 of these cases were reported to the police.

Both writers further reported that only two of these perpetrators were jailed, and many were given conditional warnings or supervised probation of between 12 and 24 months.

Clarifying the figures yesterday, the police said there were in fact 25 cases – not 26 – of sexual offences brought before the NUS board during the years in question.

“One of the cases was double-counted,” they said.

The police, in consultation with the Attorney-General’s Chambers, prosecuted the accused in nine of these 17 cases in court. The accused in the seven other cases were given conditional warnings, and one case is under investigation.

Out of the nine cases prosecuted in court, five – and not two – resulted in jail terms of between 10 days and eight months, the police said.

The police also noted that Ms Tan’s article had said there were 13 “repeat offenders” out of the 26 – which should be 25 – cases. She had used the term to refer to students who had committed multiple acts of sexual misconduct.

The police said: “In fact, based on police records, there was only one repeat offender, and he was prosecuted in court. A repeat offender is someone who had previously committed a similar offence in police’s records, or re-offended during the course of investigations or prosecution.”

The police also pointed out that Mr Toh had noted there were 53 convictions for first-time offenders who pleaded guilty to the charge of insulting the modesty of women in the past four years, and 38 of them were jailed, with an average sentence of five weeks.

“He compared the punishment of Mr Nicholas Lim with the 38 who were jailed, and implied that Mr Lim was let off lightly,” said the police.

They said that “as would be obvious from the NUS cases, in three years, nine were charged, seven were not”.

“Mr Lim’s case will have to be compared with cases where the accused was not charged.”

The police also referred to a statement they made last Tuesday, where they said that whether a first-time offender is prosecuted for the offence of insulting modesty depends on various factors, as does the decision to charge an individual with most other offences.

How an undergrad challenged NUS' policy on sexual misconduct

'Monica Baey was my student and I'm proud of her'

Factors taken into consideration by the police include the age of the accused, the number of victims, the likelihood of re-offending/rehabilitation, and the extent of remorse shown.

“Where other relevant factors are involved, for example, a prior criminal record, premeditation to evade detection, and circulation of recorded videos/images, there will usually be a prosecution.”

They added: “Our criminal justice system seeks to temper punishment and deterrence with giving offenders a chance to reform, based on assessment of all relevant factors.”

A version of this article appeared in the print edition of The Straits Times on April 29, 2019, with the headline '5 NUS students jailed for sexual offences in past 3 academic years'. Subscribe
Topics:
More
Whatsapp Linkedin FB Messenger Telegram Reddit WeChat Pinterest Print Copy permalink