In a statement yesterday, SCDF said that Corporal Kok Yuen Chin, 22, was found there at about 9.20pm. He had been celebrating his impending operationally ready date (ORD) with his squad mates.

One of the activities involved getting him into the pump well, which is a reservoir of water used by fire station personnel for training and testing pumps for fire engines, it said.

The pump well is about 12m deep and has a diameter of 1.8m. At the time of the incident, the water level in the well was about 1m from the opening.

However, Cpl Kok, who is a Malaysian national and Singapore permanent resident, did not resurface. A number of SCDF personnel jumped into the pump well to look for him, but were unsuccessful. He was eventually pulled out of the well after the water was drained.

Two SCDF regular personnel were arrested yesterday after preliminary investigations. The duo, holding the rank of Warrant Officer 1 and Staff Sergeant, were Cpl Kok's colleagues who worked in the same shift duty at the station.

Speaking briefly to the media yesterday afternoon, Home Affairs and Law Minister K. Shanmugam said that from the facts so far, it was clear the conduct of some involved in the incident was "quite wrong".

"It's in clear violation of SCDF's rules. It should not have happened. Unacceptable. Period," he said.

It should not have happened. Unacceptable. Period. Two regular officers have been put under arrest. We will get to the bottom of it. There will also be a Board of Enquiry. And details will be released in due course... The facts will come out, we will get to the bottom of it... I have also asked SCDF to do an audit. Any other evidence of such conduct: Take action. Because we have to send a clear message. Action has been taken before. When conduct which is not sanctioned takes place - celebration or otherwise - action has been taken. But then after a while, people forget and then break the rules again. So, I think it is a tragic loss of life.

"We will get to the bottom of it."

Cardio-pulmonary resuscitation was administered to Cpl Kok followed by the use of an automated external defibrillator. He was taken to Ng Teng Fong General Hospital, where he was pronounced dead.

Cpl Kok, who had drowned, was supposed to have attained ORD status tomorrow. This is the first death as a result of ragging in SCDF.

SCDF said the police are conducting investigations into what happened, including how Cpl Kok fell into the pump well, and whether anyone is criminally responsible.

"SCDF is saddened by his death and extends our deepest condolences to his family," it said. "We are providing all necessary assistance to the family during this difficult time."

Preliminary investigations showed the incident arose as a result of activities that SCDF has prohibited.

Severe punishments and deterrent action have been meted out in the past against those who engaged in unauthorised activities, SCDF said. It will be conducting briefings at all fire stations and bases, as well as checks on whether there were any such activities in the recent past.

A Board of Inquiry (BOI) will also be convened to look into the case, said SCDF, with full details to be made public in due course.

Under the Civil Defence Act , the Home Affairs Minister is empowered to convene a BOI to look into any matter connected with the government, discipline, administration or functions of the SCDF, or those affecting any person subject to the Act. Members of the board might not necessarily be from the SCDF.

Depending on the severity of the incident and culpability of those involved, punishments for regular officers can range from warning letters to demotion or dismissal from service. Officers will also be prosecuted if there is criminal wrongdoing.

As investigations are ongoing, Mr Shanmugam said it was not appropriate to comment on the details of the case. However, previous cases of inappropriate conduct within the SCDF have surfaced before, and action has been taken.

He has also asked the force to conduct an audit following the case.

"When conduct which is not sanctioned takes place - celebration or otherwise - action has been taken. But then, after a while, people forget and then break the rules again." 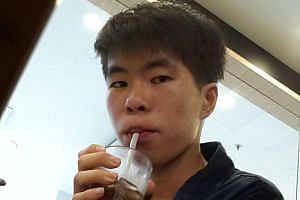 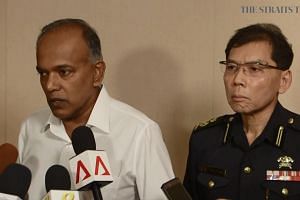 An entrenched rite of passage despite repeated warnings

Said Mr Shanmugam: "I think it's a tragic loss of life. Young man full of potential... At this stage, of course, SCDF is doing everything it can to assist the family.

"Nothing's going to bring the young man back to life so it's a tragic loss. Investigations are continuing."

In an interview with The New Paper on Monday night, Cpl Kok's aunt said that her could not swim, and had told his siblings in Melaka he was afraid of being thrown into the pump well when he returned to Singapore.

"Everyone in the camp knew that he was afraid of water, and could not swim," said Madam Kok Chun Fa. "The whole family was worried, but we thought there would be someone supervising the situation."

She said that Cpl Kok, who had returned to Malaysia to vote in the general election last week, even bought snacks to take back to Singapore for his colleagues to try to persuade them not to rag him.

The incident comes two weeks after the death of another NSF, Corporal First Class Dave Lee Han Xuan, who was a Guardsman from the 1st Battalion Singapore Guards. The 19-year-old died on April 30 after being hospitalised in Changi General Hospital for heatstroke.

A Committee of Inquiry has been formed to look into the circumstances that led to his death, and a coroner's inquiry may also be held, depending on the outcome of the police investigation for the case.