The system of checks and balances at the Aljunied-Hougang Town Council (AHTC) was "so lacking and flawed that it allowed conflicted persons to enrich themselves almost at will", said one of Singapore's top lawyers yesterday.

Senior Counsel Davinder Singh made the point at the start of two multimillion-dollar lawsuits against three opposition MPs who are leaders of the Workers' Party (WP).

His opening statement in the high-profile case came after Mr David Chan, counsel for the AHTC, accused Mr Low and Ms Lim of advancing the interests of their longtime supporters over those of residents in the constituencies.

AHTC, under the direction of an independent panel, was the first to file the suit. Its claims against the three MPs and five other defendants include $33.7 million that was paid to AHTC's former managing agent FM Solutions and Services (FMSS) from July 15, 2011 to July 14, 2015.

Mr Low and Ms Lim have been asked to account for the money and to repay any sums that had been paid out wrongfully.

The other defendants are FMSS, its owners Danny Loh and his wife How Weng Fan, and two other town councillors: Mr Chua Zhi Hon and Mr Kenneth Foo. 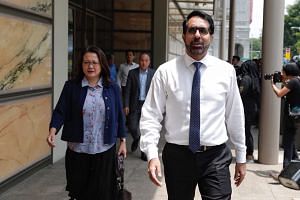 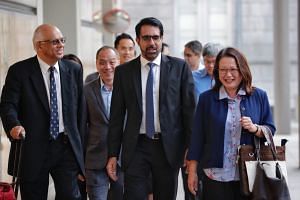 The couple, long-time supporters of WP, were also office-holders at AHTC: Mr Loh was secretary, while Ms How was deputy secretary and general manager.

Mr Chan, in his opening statement, said that shortly after Mr Low and Ms Lim's victory in the 2011 General Election in May, they asked the couple to set up FMSS to take over from existing managing agent CPG Facilities Management, even though CPG had at least two more years left on its contract.

Both MPs were aware the town council appointments placed the couple in a position of conflict, but they went ahead, Mr Chan said.

This created a system that, Mr Singh said, allowed the couple to approve payments to themselves, whereby "controls were abdicated and checks and balances were thrown to the wind".

Mr Singh accused the defendants of "misleading" residents, Parliament and the public by saying there was an urgent need to put in place a new managing agent because the incumbent had asked to be released from its contract.

Describing FMSS as just a "shell", Mr Singh said: "A company which had no track record in managing town councils of this size, a company which, apart from directors and a few management staff, had no staff at all, was given this contract on the quiet."

Mr Singh noted Ms Lim signed the letter of intent from FMSS on July 8, 2011, ahead of an Aug 4 meeting with the other town councillors.

"What was being done was effectively handcuffing AHTC and its residents to FMSS," said Mr Singh.

PRPTC, which manages the affairs of single-seat Punggol East, is suing to recover its share of losses allegedly suffered when the constituency was managed from 2013 to 2015 by WP's Aljunied-Hougang-Punggol East Town Council (AHPETC).

It came under PRPTC after the WP lost the constituency in the 2015 General Election. AHPETC was later reconstituted as AHTC.

Senior Counsel Chelva Rajah, who acts for the five town councillors, however, said they have not breached any of their duties and cannot be held liable.

He argued that his clients do not owe any fiduciary duties to AHTC.

Town councils were designed to operate with as much latitude as possible and it is for the electorate to bear the responsibility of their choice in electing the MPs who would represent them, he said.

Town councillors owe statutory duties set out in the Town Councils Act, he said, adding his clients had acted in accordance with the Act.

The civil trial, scheduled to be heard before Justice Kannan Ramesh till Nov 2, turns a new page in the long-running saga involving the financial mismanagement of AHTC. A special audit by the Auditor-General's Office - called after AHTC's auditors could not submit an unqualified set of accounts for years - identified 115 areas of non-compliance with regulations. A subsequent KPMG audit found another 71 lapses.

The case continues on Monday.