Lifting their heads to the sky, the 25,000 people at Singapore's 53rd birthday bash raised their voices to sing Majulah Singapura as fireworks in the formation of five stars shot up into the night sky.

The triumphant pyrotechnic show that ends every National Day Parade was an emotional coda to a day when Singaporeans celebrated their unity in diversity, their home and country, and felt like the sky, indeed, was the limit.

The ninth parade to be held at the Marina Bay floating platform stoked the exhilaration, utilising the elements that have made it a crowd favourite - of sky, sea and that gleaming downtown backdrop.

Making their aerial debut were divers from the Republic of Singapore Navy, who drew thunderous applause as they jumped out of a plane in freefall, opening their chutes to land in the calm waters with their operational gear and fins on.

The cheers got even wilder with the act that followed them, the skydiving Red Lions, who landed gracefully on the platform.

Sports instructor Debbie Poh was thrilled to see the Red Lions and divers together at the show.

"This couldn't have been done elsewhere because the floating platform is right next to the water," said Ms Poh, 30. "It's the perfect venue."

Watch the NDP 2018 in three minutes

President Halimah Yacob attended the parade for the first time as Singapore's head of state. The crowd rose to its feet as one, cheering and waving flags at her arrival.

Singapore's first female president, with her trademark warmth, stayed after the parade was over to mingle with fellow Singaporeans.

At home, Singaporeans watching the sundown parade on TV got the best view when spectators in the stands held up red and white placards from their funpacks, to form the sentence "WE (heart) SG".

It was a smart idea, said student Jasdev Singh, 14. "The coordination required is really cool and the results turned out awesome... It shows how each one of us can play our part and contribute." 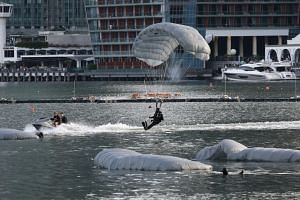 Also contributing were more than 3,000 participants, who performed in the spectacular mass displays of song and dance that showcased home-grown creativity.

We are Singapore, said the 2018 National Day Parade. It was also the year's theme song - a 1987 classic by Hugh Harrison made new by musician Charlie Lim, but still familiar and beloved.

Ms Doris Lim, 40, who works in the IT industry, said the remade version was refreshing. Of the new lyrics, she said: "They are as meaningful as the old ones."

The affection for a shared Singaporean past was palpable, as the audience sang heartily along with the combined schools choir - back after five years - to National Day favourites such as Chan Mali Chan and Munnaeru Vaalibaa.

Like the parades of previous years, this one melded people's favourite things about Singapore into a satisfying whole.

The past was very much with the present, when Singaporeans planted their feet and stood together, and looked to the future.