SINGAPORE - Peace, stability, and harmony were among the top birthday wishes from Singaporeans gathered at and around the Marina Bay floating platform on Thursday (Aug 9) for the National Day Parade (NDP).

Said Jotnoor: "My hope is for Singaporeans to cherish their dreams and have success in working towards their futures."

"My wish is less cliched," he said, laughing. "It is to maintain the multicultural society we have."

Taxi driver Peh Swee Lim, 70, is attending the NDP for the first time.

"I'm very excited," he said. "I've tried to ballot for the tickets countless times but I'd not been lucky enough." 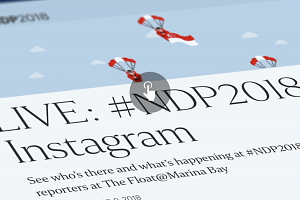 NDP 2018: Performances come together from the land, skies and water for the parade

"I'm glad I get to watch the NDP live this year because of the aerial display put up by the Air Force. My wish for Singapore is peace and stability for everyone."

Mr Raghuram Karumuru, 44, and his wife Sandhya Raghuram, 38, both IT project managers, are also attending the NDP live for the first time.

Said Mr Raghuram: "I hope for Singapore to be the best as it is now. And I hope we can become more inclusive and helpful in terms of education, helping more groups like senior citizens or the physically disabled. I hope I can help to contribute to that too."

Mrs Sandhya said: "I wish that we can all contribute in the progress of our nation and serve in different capacities in the communities."

"It's my favourite part. Everytime I see it I get very excited," said Ms Jayanthi.

She had previously attended a preview and she said this year's show was relevant to Singaporeans' lives.

"This year's show depicts our everyday lives," she said.

IT manager William Chow, 45, is attending the parade with his son Samuel, mother Lilie and younger sister Agnes.

"Singapore is 53 years old, and it's a miracle we survived against all odds. My wish is we will be celebrating SG100 and more, so my boy and my boy's boys will continue to see this miracle," he told The Straits Times.

Ms Shazana Latiff, 34, hopes for Singapore to be more harmonious.

"I would like more social integration across the races and classes, and foreign talent, especially because they contribute so much to Singapore," said the finance admin manager.

She, her two daughters Laiqa, three, and Lana, six months old, and her cousin Waui Hamid, 30, a designer, were celebrating National Day at the field outside Victoria Theatre.

Ms Syafiqah Faizul, 18, a student, is at the parade with her mother Sutinah Sujaair and grandfather Sujaair Ali. The last time they attended an NDP was at the old National Stadium.

"I wish for Singapore to be more prosperous, and that there would continue to be harmony among the different races," she said.

Mr Rustom Ghadiali, 80, and his wife Shirin, 65, were with their grandson Shaan Shetty, 14, for a family day out at this year's NDP.

Mr Ghadiali, who used to head a semi-conductor firm and has attended every NDP since 1965, said: "My wish for Singapore is that we continue to prosper.

"I hope also that we'll be happy with what we have at the moment and teach our children that."

Ms Yau Ying Shan, 35, an engineer, was at the NDP with the family, including daughter Yeo Le Ying, four.

Le Ying, when asked what she's looking forward to in the parade, said: "A lot of fireworks (to) come out!"