The upcoming Budget will include a focus on keeping Singapore safe and secure and ensuring its industries can continue to transform and create good jobs for workers, Finance Minister Heng Swee Keat said on Tuesday.

This includes "enabling our workers to learn new skills to upgrade, in particular enabling our companies to build deep capabilities so that they can stand to be more competitive in the coming years", he said.

"At the same time, we have to look after the environment and quality of life in Singapore. So it is quite a comprehensive agenda," Mr Heng added.

In his Budget speech on Feb 18, Mr Heng will also be providing details of the Merdeka Generation Package and how Singapore is working to keep the elderly active and healthy, he said.

He was speaking to reporters on the first day of the Chinese New Year at PSA's Pasir Panjang Terminal, where he joined workers on duty for celebrations.

Mr Heng added that he remains upbeat about the Republic's prospects this year.

"The global economic environment is more uncertain and we can expect some slowdown, but we must continue our transformation and remain optimistic that we will continue to make good progress," he said. "We have to look not just over one or two quarters, but over how we can make an effort in transforming our economy," he said, and this includes continuing to have good long-term growth on the jobs front. 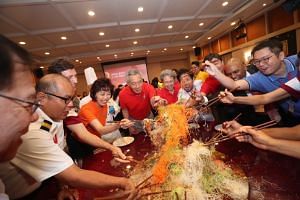 Budget 2019: Who wants to be the Finance Minister?

Budget 2019 expected to give more support for 'vulnerable' PMETs

He also highlighted PSA's efforts in restructuring as a result of its workers' dedication and contributions. "PSA had excellent results last year, they had the best results so far in terms of volume of containers they handle both in Singapore and worldwide," he said. "A lot of this is due to the tremendous hard work and good work of our workers."

Last year, PSA handled a record 81 million twenty-foot equivalent units (TEUs) of cargo in its port projects in Singapore and around the world. This was up by 9.1 per cent from 2017.

"I had a very good tour of the operations in the PSA to look at how PSA itself is transforming. With new technologies, new trade rules, PSA had to continue to upgrade and restructure its operation to form new partnerships," he said.

"I'm very happy to see the work that's going on, that we have a very strong leadership team in PSA, a very good relationship with our workers and it's this strong tripartite relationship that will see us growing our container volume, and strengthen our position as a sea hub," Mr Heng added.

"At the same time, all over Singapore, we have many, many agencies and companies that are working, whether at the airport, seaport, in our land transport system, and key institutions like our hospitals and the police and SAF (Singapore Armed Forces) - even as we enjoy our holiday. This is something which I hope all of us will appreciate," he said.

Several other ministers were also out to thank workers on Tuesday.

A version of this article appeared in the print edition of The Straits Times on February 07, 2019, with the headline 'Budget will include help for industries to continue to transform'. Subscribe
Topics:
More
Whatsapp Linkedin FB Messenger Telegram Reddit WeChat Pinterest Print Purchase Article Copy permalink