SINGAPORE - Actor Aloysius Pang has been brought home, as the KC-135R tanker aircraft carrying his body arrived at Paya Lebar Air Base around 6pm on Friday (Jan 25).

Corporal First Class (NS) Pang will be accorded military funeral honours and cremated at Mandai Crematorium on Sunday, the Ministry of Defence said in a statement on Friday.

CFC (NS) Pang was accorded a homecoming ramp ceremony with Chief of Army Goh Si Hou in attendance, a guard of honour and fellow soldiers of the artillery formation, Mindef said. The family of CFC (NS) Pang witnessed the ceremony.

Plans for a farewell here has also been finalised, NoonTalk Media said on Facebook on Friday afternoon.

Those who wish to bid him farewell can do so from Saturday noon to Sunday noon at 82A MacPherson Lane, the talent agency who managed the actor said.

"A private wake for the family will take place on Saturday morning. We respectfully appreciate the privacy given during this period," it added.

This comes a day after agency co-founder Dasmond Koh told reporters that a public memorial service is being considered for CFC (NS) Pang.

The actor, 28, died on Wednesday night from injuries suffered last Saturday during a military exercise in New Zealand.

CFC (NS) Pang was carrying out repair works inside a Singapore Self-Propelled Howitzer and suffered serious injuries to his chest and abdomen when the gun barrel was lowered, Mindef said.

Earlier, NoonTalk Media had posted on Facebook that CFC (NS) Pang's body was on the way back from Auckland. The post read: "Dear friends, Aloysius is on his way home. We are finalising plans for his farewell.

"We are aware that many of you would like to say goodbye. We will be releasing more details shortly. Thank you for your patience and understanding."

Mr Koh, 46, who spoke to reporters at Changi Airport on Thursday night after touching down from Auckland, said there may be a memorial service for the actor so that "all of his fans and loved ones can say goodbye". 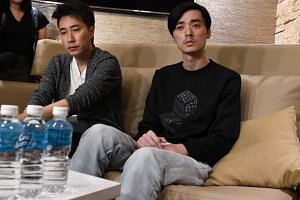 Public memorial might be held for Aloysius Pang, his family's 'precious'

Also on the flight was the actor's second of two older brothers Kenny Pang, who said his younger sibling was "the precious" of his family.

"Our grief counsellors are on the ground to comfort the family. But I know that no words or deeds can relieve their sorrow or replace their loss. I hope and pray that the passage of time will bring them some comfort," he added.