The defence ministers of Asean nations have inked the world's first multilateral air guidelines aimed at keeping congested skies safe for military aircraft and preventing skirmishes over the high seas.

The non-binding code complements an existing set of protocols for navy vessels: The Code of Unplanned Encounters at Sea (Cues), designed to reduce the chances of accidents at sea, especially in contested waters such as the South China Sea.

Today, they hope to persuade eight more countries, including the United States and China, to subscribe to the new air code.

A joint declaration signed at the annual Asean Defence Ministers' Meeting (ADMM) pledged to promote regional peace and stability, as well as deepen cooperation in counter-terrorism, air and sea safety, and cyber security, among other things.

Asean nations, for instance, will set up a virtual network of experts to counter chemical, biological and radiological threats from terrorist groups and rogue states by sharing best practices and information.

Also in the pipeline are inaugural joint maritime exercises between Asean and China, as well as Asean and the United States.

Defence Minister Ng Eng Hen said after the signing that Asean navies are on their way to Zhanjiang in China's Guangdong province for the first Asean-China maritime exercise to be held next week.

The ministers also agreed on an Asean-US maritime exercise next year, although officials will have to discuss where to hold it.

Another initiative that was adopted by all Asean states yesterday was "Our Eyes", an Indonesia-led counter-terrorism intelligence-sharing platform which Singapore, Malaysia, the Philippines, Thailand and Brunei signed up to in January. 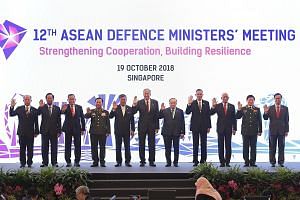 Asean hopes Plus partners will adopt air code too

Dr Ng said the launch of these endeavours "underscores the centrality of Asean, as collectively we have set direction and built the momentum to ensure stability in our region".

Dr Ng hands over the ADMM chairmanship to Thailand today at the conclusion of the ADMM-Plus, where the eight partner-countries - Australia, China, India, Japan, New Zealand, South Korea, Russia and the US - are expected to commit to boosting counter-terrorism cooperation.

"The ADMM has come a long way since 2006 and has been able to make good progress because it has been very focused on enhancing regional and international cooperation to resolve specific problems," said Dr Ian Storey, senior fellow at the ISEAS - Yusof Ishak Institute.