Asean defence ministers who backed the new multilateral air code yesterday are hoping to convince their counterparts in the Asean Defence Ministers' Meeting-Plus (ADMM-Plus) grouping to sign on when they meet today.

The air guidelines - a set of communication protocols called Game (Guidelines for Air Military Encounters) - are meant to reduce the likelihood of accidents that could escalate into a conflict, especially with increased air traffic in the region.

While they are non-binding and voluntary, the guidelines serve as a "practical confidence-building measure" for air forces to improve their operational safety.

Asked at a press conference about the usefulness of such non-binding protocols in the light of a recent near-miss between a US warship and a Chinese destroyer in the South China Sea, Defence Minister Ng Eng Hen likened the guidelines to seat belts in vehicles.

"Is the glass half empty or half full? Without them, does one expect the encounters would get worse? I think the answer is, yes, it may very well be that if there were no guidelines, there would be increased risk of mishaps," he said.

"In a way, they are like seat belts - not completely protective but at least you will find some protection." The new air code is applied to unplanned encounters between military aircraft over high seas, and spells out acceptable and unacceptable behaviour, such as keeping a safe distance, avoiding reckless manoeuvres and "(refraining) from the use of uncivil language or unfriendly physical gestures".

The guidelines adhere to existing aviation standards, national and international law, as well as Asean principles of transparency and mutual trust.

Dr Ng added that it is significant that the Asean countries had unanimous agreement on the code.

"There is a reason it is slightly more difficult than the Code for Unplanned Encounters at Sea, I presume because the encounters are, in terms of time and space, much more compressed as compared to sea, so it is a significant achievement."

Analysts say that the code is an important step forward, but caution that it is non-binding.

Dr Ian Storey, a senior fellow at the ISEAS - Yusof Ishak Institute, said the code was an important step in preventing mishaps from occurring and escalating into unwanted crises. "The next step will be for the ADMM to persuade its Plus partners to endorse and, more importantly, follow the code. As with the USS Decatur incident a few weeks ago (the near-miss between a US warship and a Chinese destroyer), China has a tendency to ignore voluntary agreements when it wants to." 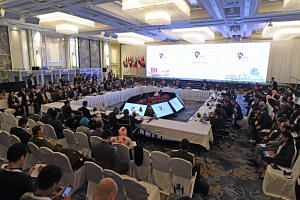 Dr Collin Koh, a research fellow at the S. Rajaratnam School of International Studies, said that any such code is reliant on the goodwill of each signatory to comply.

"And if it isn't binding, there is always going to be a challenge of compliance and enforcement - especially in the event of a violation. Look at the example of the China-US memorandum of understanding on aerial and naval encounters in 2014 - there were still such aerial incidents in 2016, for example."