SINGAPORE - This year's Budget will be announced by Finance Minister Heng Swee Keat in Parliament at 3.30pm on Monday (Feb 18).

Will this be an election Budget, amid expectations that early polls may be called this year? Will there be an increase in government spending? What will Mr Heng prioritise as a leader of the ruling People's Action Party's fourth-generation team?

Follow The Straits Times' live coverage of the Budget for answers to these questions.

Here's what readers and viewers can expect on Monday:

* Real-time updates: Watch a live stream of the speech and get instant updates through ST's Budget live blog on straitstimes.com.

There will be more reports on the Budget microsite at str.sg/budget2019, as well as on ST's Facebook and Twitter accounts.

* Live discussion: Join ST columnists at 6.30pm for a Facebook Live show, The Budget & You: Why It Matters. The panellists - associate editor Ravi Velloor, opinion editor Chua Mui Hoong and senior health correspondent Salma Khalik - will answer questions from viewers. Send them your questions in the comments section during the show on ST's Facebook page.

* Quick summary: Get Budget highlights delivered to your e-mail inbox, right after the speech. Sign up now for the special-edition newsletter at str.sg/newsletters.

* In-depth analysis: Associate editor Vikram Khanna, who expects an expansionary Budget that will be high on government spending, will give his take on how the measures will affect Singapore's economy and its ability to meet future challenges. Read it on straitstimes.com. 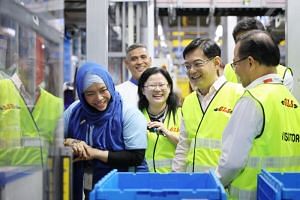 Ms Chua, who will take part in the Facebook Live discussion, said this will be the first Budget presented by Mr Heng as a clear successor to Prime Minister Lee Hsien Loong.

"Mr Heng has an opportunity to take back the political initiative from critics, with a Budget speech and fiscal policy that bring everyone, including naysayers, on board the journey to the future," said Ms Chua, 50.

Ms Khalik, 64, will discuss the much talked about Merdeka Generation Package. The multi-billion-dollar package for Singaporeans born in the 1950s will help cushion the impact of rising healthcare costs for nearly half a million people.

Mr Velloor, 60, meanwhile, notes that this is a particularly critical year for the Budget amid an increasingly challenging external environment, including trade tensions between the United States and China.

"We can expect Mr Heng to talk about ways to help companies grow in the region and have a wider footprint in Asia," he said.

Pressed for time on your way home? Tune in to the post-Budget discussion on Money FM 89.3 at 7pm on Monday.

Readers can also look out for more Budget special reports in the print edition of ST on Tuesday.

For post-Budget analysis, there will be The Straits Times-UOB Budget Roundtable discussion with economists and trade union representatives. Follow the discussion, which will be moderated by Mr Khanna, 62, on ST's website next Sunday (Feb 24).