SINGAPORE - The question of what to do with the Sembawang Hot Spring at Gambas Avenue has been mulled over for decades.

Senior Minister of State for Defence Ong Ye Kung said on Saturday (April 23) that the land where the hot spring is on will be returned to the State.

The area may be turned into a park, as Mr Ong said he hopes a public agency such as the National Parks Board can take over, and maintain it.

Here's more about the only hot spring on mainland Singapore: 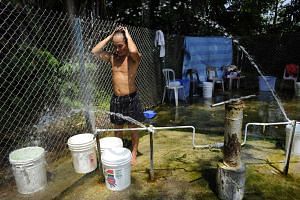 The Sembawang Hot Spring is found near the junction of Sembawang Road and Gambas Avenue, along Jalan Ulu Sembawang. A deserted brick house believed to be part of a former bottled drink factory marks the site.

The spring is currently on Sembawang Air Base grounds, but is open to the public from 7am to 7pm.

While it is called a "spring", today, only a small concrete base with standpipes channelling the hot spring is open to the public.

Many bring their own buckets and basins to fill them with spring water from the taps.

It was discovered in 1909 by Chinese merchant Seah Eng Keong, and the village in the area was named Kampong Ayer Panas, which means "hot water village" in Malay.

Mr Seah sent the water for testing in Europe and it was found to resemble water from "mineral hot springs" and to have "valuable medicinal properties", an article from 1909 said.

He bottled the water for sale and branded it "Zombun".

The site was acquired in 1922 by soft drinks maker F & N, which set up a plant nearby to tap the mineral water, and sold it under the brand name Seletaris.

3. What's in the spring water?

The water is rich in minerals and believed to have curative effects. When The Sunday Times sent the water for testing in 2002, it was found to have substantially more chloride, and three times more sulphide content than tap water. Due to its mineral content, the water is slightly alkaline.

The spring water is said to cure rheumatism, and heal skin problems such as acne or psoriasis. Doctors said there is no scientific evidence to back up these claims. However, the heat of the water can relax muscles and joints.

A carpenter lost six toes back in 2002 after soaking his feet in the hot spring water. Mr Lai Soo Han, who was 57 then, suffered from diabetes and was hoping to benefit from the water's supposedly therapeutic qualities.

But his condition affected his blood circulation, and he scalded his feet badly without feeling any pain.

Mr Lai said he had immersed his feet in a basin of spring water for 30 minutes. When he got home, blisters formed and his wounds later became gangrenous. He ended up losing three toes on each foot.

The Singapore General Hospital issued an advisory then to warn that people with nerve disorders or diseases affecting blood circulation should stay away from the hot spring.

A study by Nanyang Technological University researchers found that the spring was formed as water found its way through the granite rocks at the speed of 150 litres a minute.

The exact source of the spring is not known, but it could be far off to the north-west of the hot spring, possibly at Bukit Timah and on high ground.

The water enters the rock masses through cracks and fractures, and travels down to 3 km underground.

As the water moves towards the earth's core, it is heated up by the hot rock masses deep in the earth to temperatures of between 100 and 150 deg C.

Pressure forces the heated water upwards, and it rises through a system of cracks in the rocks up to the surface, by which time the temperature drops to 70 deg C.

In 1985, the Government acquired most of the land in the area for military use.

7. Saved from the bulldozer

In 2002, the hot spring had a close call. Plans were made to expand Sembawang Air Base over the land occupied by the spring, but the Ministry of Defence heeded calls from the public to preserve it.

A fence was built around it, but the public is given access from 7am to 7pm. At the same time, a cemented walkway replaced a muddy footpath and drainage pipes were installed.

Ideas to spruce up the area have sprung up again recently.

Two design students, Mr Lee Wei Sen, 26, and Ms Ng Siew Mun, 23, won a prize in the My Ideas for Public Spaces competition with their idea for the hot spring.

The pair proposed having wooden tubs of various sizes at Sembawang Hot Spring.

"It's a very simple idea that you can collect the wooden barrel, fill it up on your own and soak in it and enjoy yourself," said Mr Lee.

In the Committee of Supply debate in April, when ministries presented their spending plans, Dr Lim Wee Kiak (Sembawang GRC) suggested that the area around the hot spring can be developed into a national hot springs park.

Senior Minister of State for National Development Desmond Lee said that if the area was to be developed, it must retain its rustic characteristics.