Preliminary investigations into the worst power outage in 14 years show the disruption was due to a partial loss of electricity supply from two power generation companies, said energy utilities provider SP Group.

The companies were not named and, when asked by The Straits Times, the Energy Market Authority (EMA) said that investigations are ongoing and it "will provide more information when available".

A total of 146,797 residential and commercial customers were plunged into darkness by the power supply disruption, which occurred at 1.18am yesterday and lasted 38 minutes, SP said.

Power was restored at 1.56am, said SP, but some customers continued to experience interruptions as internal networks needed to be reset for some buildings.

There are seven companies which generate power and feed it to the national grid.

While SP manages the grid, it does not own these companies. 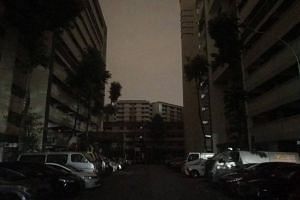 The disruption to power not only affected households, but also shut down traffic lights and street lights on multiple roads.

Two hospitals had to resort to backup power generators.

Ng Teng Fong General Hospital and Jurong Community Hospital, both in Jurong East, said that they suffered a partial power outage but added that operations and patient care were not affected.

Nee Soon Town Council chairman Louis Ng said a few lifts had to be manually restarted after power resumed and were fully operational by the day.

Residents who were still awake had similar experiences to Mr Tan Boon Tong, 37, a healthcare operations executive, who said the lights and fans went out suddenly at his Housing Board flat in Ang Mo Kio Avenue 4.

"My mother was in the living room watching television and it suddenly went off. So I went out to check, and the neighbourhood was in total darkness," he said.

Photographer Aaron Rodrigues, 25, was driving home on the Pan-Island Expressway to Yishun from Nanyang Technological University (NTU) at the time.

"It was like driving along a Malaysian highway at night; you just had to go slowly," he said. "At the traffic junctions, it was amazing how everyone from different directions stopped."

The EMA said that it takes a serious view of disruptions to Singapore's electricity supply.

"We will review the outcome of our investigation before deciding on the actions to take," it said.

It added that it would work with the industry to put in place measures to minimise the risk of similar incidents happening in the future.

One of the worst power outages in recent memory happened in June 2004 when a two-hour blackout hit many areas, including Clementi, Changi, Jurong and Marina Centre.

The outage affected about 300,000 households and was caused by stoppages in the natural gas supply from Indonesia.

On June 1 this year, thousands of offices and businesses in the Central Business District and surrounding areas were hit by a power outage which affected 3,156 customers in parts of Raffles Quay, Robinson Road and Shenton Way for over half an hour. SP later traced the problem to maintenance work by its crew at a substation.

NTU Associate Professor Gooi Hoay Beng, who is from the School of Electrical and Electronic Engineering, said Singapore's average interruption time is less than a minute per customer a year. This is better than Tokyo (four minutes), New York (20.53 minutes) and Hong Kong (23.40 minutes), according to the EMA website.

Said Prof Gooi: "Typically, we are able to cover the outage of one generator unit without incidents. However, when you have simultaneous loss of two or more generating units, the system may not be able to handle it."

Assistant Professor Xu Yan, who is also from NTU, said the restoration of power in 38 minutes was "definitely fast", given the extent of yesterday's disruption.

As Singapore's power system becomes even more complex with the use of more renewable energies, such as wind and solar power, it is important to keep reinforcing the network and optimising the system's operations, Prof Xu added.

Mr Liang Eng Hwa, chairman of the Government Parliamentary Committee for Finance, and Trade and Industry, said that the committee would raise the issue in the coming Parliament sitting.

He said: "We must take every power supply disruption very seriously, investigate the root cause and put in place measures to minimise recurrence."