On Jan 9, 2015, a gunman burst into the Hyper Cacher Jewish supermarket in Paris, opening fire and killing four people.

Taking several shoppers hostage, Amedy Coulibaly threatened to kill them if the police stormed the shop where his friends - the two brothers behind the fatal attack on satirical magazine Charlie Hebdo - were holed up, in a village to the north.

While the French police eventually raided the deli and killed Coulibaly, the live broadcasts could have compromised their efforts.

This point was noted by the Ministry of Home Affairs (MHA), as it proposed a new Bill to empower the police to make a communications stop order - requiring people to stop taking or sending pictures and videos of an incident area.

If the stop order is issued - with the Home Affairs Minister's authorisation - people will have to stop communicating text or audio messages about ongoing security operations in the area as well.

People will be informed of the order through print and broadcast media and social media platforms. 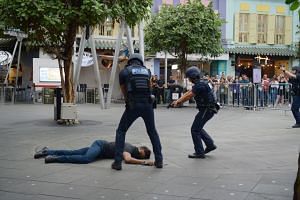 These are among the features of the new Public Order and Safety (Special Powers) Bill, introduced in Parliament yesterday.

MHA said leakage of information could endanger security officers and members of the public caught in an attack.

It added: "Typically, a communications stop order will apply only to a specific location where a security operation is being carried out, for the duration of that operation. There is no intention for (it) to be used widely."

When an order is not issued, it will not be an offence to film or take pictures of an incident area or of law enforcement operations, the MHA said, adding that information exchange with the public remains important as it supports investigations.

If the Bill is passed, MHA intends to bring the laws into effect within the year.