SINGAPORE - In the event of a terror attack, members of the public may be required to stop taking photos or videos in an affected area and not forward messages about police operations to others.

Aimed at protecting the secrecy of tactical operations, this is among powers that the authorities will be given if a new Public Order and Safety (Special Powers) Bill is passed.

Introduced in Parliament for its first reading on Tuesday (Feb 27), the proposed Bill will empower the police to make a communications stop order.

If issued, all in an incident area - including journalists and members of the public - will have to stop making or communicating films or pictures of the place.

They must also stop communicating text or audio messages about ongoing security operations there.

Failure to do so can result in penalties, with a maximum fine of $20,000 and/or up to two years' jail.

This stop order may be issued by the Commissioner of Police, if authorised to do so by the Home Affairs Minister. 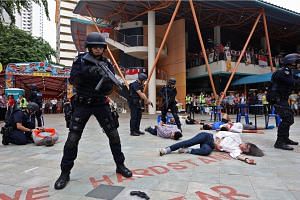 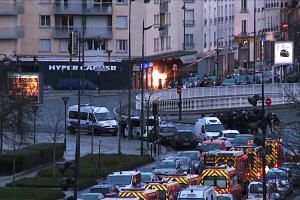 The move follows incidents such as the 2015 attack on Hyper Cacher supermarket in Paris, where the lone terrorist holding hostages in the store was able to watch live television broadcasts of police officers outside preparing to storm the place, said the Ministry of Home Affairs (MHA).

During a series of coordinated attacks across Mumbai in 2008, live broadcast of security forces preparing to storm the Taj Mahal Palace Hotel also allowed gunmen inside to anticipate their next moves.

"In both incidents, there is no doubt that the information available to the terrorists made the police operation more difficult, reduced the chances of a successful operation, and put the safety of the officers and hostages at greater risk," said MHA in a statement.

Apart from allowing communications stop orders, the proposed Bill will give police the power to take down or disable unmanned aircraft and autonomous vehicles and vessels in and around an incident area, regardless of their intent and activity.

Such devices "can be used for surveillance by the terrorists or even as weapons", said MHA. Currently, police may take them down only if they are clearly posing a threat to public safety and security.

If passed, the Public Order and Safety (Special Powers) Bill will repeal the existing Public Order (Preservation) Act, which was enacted in 1958 to provide special powers for dealing with large-scale riots.

One reason the new law is needed is that existing laws do not allow for expanded powers in situations where public safety is seriously threatened, but where there is no large-scale public disorder, said MHA. This includes the aftermath of a terror attack, when a manhunt for suspects is under way.

The proposed Bill will allow police to stop and question people within an incident area, and will make it an offence if people refuse to provide information.

The Bill will also allow police to direct building owners in an incident area to take actions such as closing their premises, or to provide information such as floor plans.

The proposed Bill is the latest piece of legislation introduced to deal with the heightened terrorist threat.