Challenges ahead, so it's important to keep on improving lives for workers, he says

A slowing global economy and ongoing trade tensions between the United States and China will have an impact on Singapore, Prime Minister Lee Hsien Loong said.

Growth this year may not be as strong, he told reporters on Tuesday, after visiting workers at ground-handling and catering firm Sats at Changi Airport.

"We will have challenges ahead," PM Lee said, noting that it is important to "keep on upgrading ourselves and improving lives for our workers".

"Last year was good growth, the year before was also good growth. This year I think we will continue to grow. It may be not as vibrant as before but we work hard; even if this year is slower, the year after that we can make it better," he said.

The Singapore economy grew 3.3 per cent last year, just below the 3.5 per cent in 2017. But headwinds mean it is expected to grow by between 1.5 per cent and 3.5 per cent this year.

During PM Lee's visit to Sats on the morning of the first day of the Chinese New Year, he was briefed on the company's efforts to innovate and stay ahead of the competition.

He noted that global and regional developments will also affect Singapore's position as an air hub.

"The air hub is a very important part of our economy... In the long term, I expect that business will still grow because the region in the long term will continue... picking up and people are travelling," he said.

"We make sure that we are competitive, (and) they will fly through Singapore."

Asked about ongoing airspace issues between Singapore and Malaysia, he said: "We will discuss with them and we will work very hard to make sure that we enable Changi to continue to be able to operate smoothly, and the Malaysians also to have their airports operating smoothly, and traffic can flow throughout the region."

Singapore and Malaysia are in talks about a new aircraft landing system that Singapore proposes to have at Seletar Airport, as well as airspace over Pasir Gudang in Johor, which Singapore has been managing for Malaysia since 1974. 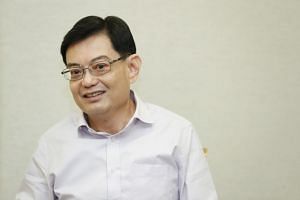 In total, they met about 150 staff in the various kitchens and tray assembly area, as well as the innovation and product development team.

The visit ended with a traditional lohei session with workers, union leaders and management staff.

PM Lee, who was on his first visit to Sats, said: "They (Sats) do a very important, quiet job, making sure that we keep our air hub humming and that passengers coming in and out of Singapore can get good meals on aeroplanes.

"Large numbers of people are working here; I think today there are 500 people on duty, preparing meals, getting things packed, logistics sorted. I was very happy to have a chance to say hello to them, wish them xin nian kuai le (Happy New Year), and also wish them a very good year ahead and thank them for their hard work."

Before the Sats visit, Mr Ng, the labour chief, was at Changi Airport to greet cabbies and thank them for providing transport services to Singaporeans during the festive period.

He was with Parliament Speaker Tan Chuan-Jin and about 50 leaders from the National Taxi Association. Over 1,000 taxi drivers received gift bags prepared by NTA.