SINGAPORE - The Singapore Convention on Mediation, which was signed by 46 countries in Singapore on Wednesday (Aug 7), is more than just a strengthening of international dispute resolution, said Deputy Prime Minister Heng Swee Keat.

It also bears testament to countries' continued commitment to a rules-based international order, which is particularly crucial now as the system that has underpinned global peace and stability is coming under pressure, he added.

"It allows for predictability and the management of relations and issues based on agreed principles. This in turn assures countries, big and small, that their interests will be taken into account," he said at the gala dinner for the Singapore Convention Signing Ceremony and Conference.

A rules-based international order also provides a strong foundation for the international community to come together to tackle the many global challenges, Mr Heng told the audience of over 600 at the Shangri-La Hotel.

"These include tackling global warming and climate change, improving food security and access to clean water, and reducing poverty and the risk of pandemics," he said.

Mr Heng added that the United Nations (UN) Convention on International Settlement Agreements Resulting from Mediation comes on the back of Singapore's longstanding commitment to the international rule of law and its efforts to better serve the needs of companies in the region. 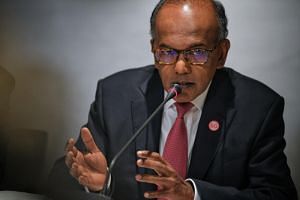 Countries will be 'fairly quick' to ratify S'pore Convention on Mediation: Shanmugam

The Republic has been a strong advocate for a rules-based international order, as seen in the active role it played in the UN, including the negotiation of the UN Convention on the Law of the Sea, and by providing a trusted and neutral venue for commercial dispute resolution, Mr Heng cited, among others.

In his 16-minute address, Mr Heng also noted that with the rise in cross-border commercial transactions in the region, more cross-border differences may arise, and parties need fair and efficient ways to resolve disputes in a timely manner.

While litigation and arbitration appeal to businesses, with certainty that judgments and arbitral awards can be enforced internationally, mediation has risen in prominence, he said.

"Mediation is cheaper and faster. It preserves harmony and business relationships, which is in line with many cultures, particularly in Asia," he added.

But while mediation has its advantages, its utility is limited if parties are not assured of enforcement, said Mr Heng, which is why the Singapore Convention on Mediation - the first UN treaty to be named after the Republic - is critical to the adoption of international commercial mediation as a dispute resolution option.

"The Convention will make it easier for businesses to enforce mediated settlement agreements with their cross-border counterparts. This is particularly so for high-value, cross-border transactions - such as mega infrastructure projects," he said.

He noted that it is important to have good dispute resolution mechanisms that can resolve issues when they arise across the lifetime of the project.

"Litigation or arbitration proceedings, once initiated, are often protracted. In the meantime, the project stalls. The earlier and more swiftly problems can be resolved, the better.

"Mediation is therefore a good option for such disputes because it focuses on solving the problem rather than on deciding who is right. It seeks to resolve the problem in a way that will preserve relationships and allow the project to go on," said Mr Heng.