Prime Minister Lee Hsien Loong thanked Mr Khaw, who is also Coordinating Minister for Infrastructure, for his lifetime of public service to Singapore in a valedictory letter released to the media on Friday (June 26).

Here is his letter in full:

As you retire from politics, I write to thank you for your lifetime of public service to Singapore.

You entered politics in 2001, after a distinguished public service career. By chance, the years of both your joining and leaving politics have been marked by global crises - then the aftermath of September 11, and now the Covid-19 pandemic. They bookend a remarkable political career, during which you have taken on the most challenging jobs in the Cabinet. In your quiet, unassuming way, you have made a huge and lasting contribution, and strengthened Singaporeans' faith that this Government can and will solve their problems and improve their lives.

One of your first appointments after being elected was to the Ministry of Health (MOH). Healthcare was not new to you, having run several hospitals as a civil servant. When the Severe Acute Respiratory Syndrome (Sars) outbreak happened, you were Senior Minister of State. You were on the front line, going into the hospitals to check on the arrangements and encourage the medical staff. Subsequently, you took over as Minister for Health from Mr Lim Hng Kiang. Learning the painful lessons of Sars, you instituted new processes and extensive preparations, to get us ready for the next novel disease outbreak. These served us well when Covid-19 came upon us. 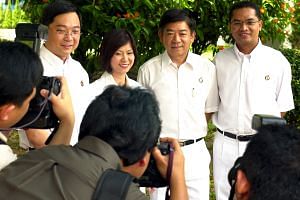 Transport Minister Khaw Boon Wan will not contest election, to retire from politics

After the 2011 General Election, you took on the National Development portfolio. Your immediate task was to assuage public concerns about HDB waiting times and affordability. You ramped up the HDB building programme, reduced Built-to-Order (BTO) waiting times and introduced policies to enable newlyweds to own their first flat earlier and live near their parents. These measures gave young Singaporeans the confidence that an affordable home would always be within their reach.

At the same time, you advanced plans to remake Singapore into a liveable and sustainable city. In the URA Master Plan 2014, you set out our vision to expand the city centre to the Greater Southern Waterfront, and to extend our Park Connector Network throughout Singapore and make us a City in a Garden. Future generations will build on these lasting legacies.

Having helmed Health and National Development, no one would have begrudged you lighter responsibilities in the subsequent term. Yet after the 2015 General Election, you volunteered to take on the politically spiky transport portfolio, and later to serve as Coordinating Minister for Infrastructure. Our immediate priority was to improve the reliability of our MRT system. To achieve this, you set a target of one million mean kilometres between failures (MKBF), which at the time many thought unrealistic. But in the first quarter of this year, our MRT system not only achieved your target but surpassed it, hitting 1.4 million MKBF. This dramatic achievement is the product of a huge amount of hard work, your encouragement for the regulator and rail operators to work together as one team, your strengthening of rail engineering capabilities, and your emphasis on the crucial but often unnoticed work of continuous system maintenance and timely asset renewal.

Externally, you strengthened Singapore's air hub and sea hub status. On your watch, Singapore was successfully re-elected to the International Civil Aviation Organisation Council and International Maritime Organisation Council. You pushed for the construction of Changi Runway 3, Changi Airport Terminal 5 and the Tuas Megaport. These projects have been affected by the current uncertainties, and the schedules have to be adjusted and plans reviewed, especially for Terminal 5. But we are determined that Singapore should remain an air and sea hub, and these long term investments will help consolidate Singapore's position in the post-Covid-19 world.

With Malaysia, we concluded complicated negotiations on the Johor Bahru-Singapore Rapid Transit System Link and the Kuala Lumpur-Singapore High Speed Rail. Due to changes of government in Malaysia and the pandemic, both projects have been delayed, but discussions continue with our Malaysian counterparts to reach a win-win outcome. With Indonesia too, airspace remains a complex and sensitive bilateral issue under discussion. In both cases, your personal rapport with foreign counterparts has proved invaluable.

Besides your Ministerial duties, you also made significant contributions to the People's Action Party. After the disappointing results of the 2011 General Election, you led the post-mortem to identify where the Party had fallen short. You presented your conclusions and recommendations at the 2011 Party Conference, where they were actively debated. That was a watershed moment for the PAP. The honest introspection and self-critique set the Party on a fresh course. Following that Conference, you became Party Chairman taking over from Lim Boon Heng, and played your part to drive change from within. This contributed much to our decisive win in the 2015 General Election.

As an MP, you are well known for being dedicated and responsive to residents. You were active in bringing the community together, and infusing the kampung spirit in your residents. You took special pride in keeping Sembawang clean and green, and residents often encountered you when you took walks in Sembawang Park to relax. Sayang Sembawang, your community tagline, encapsulated your efforts to make Sembawang an endearing home.

You were in my Cabinet since day one, and have been one of my most reliable lieutenants. Beyond your own portfolios, your comments on matters put before Cabinet always went to the heart of the matter, and focussed our minds on the key considerations and trade-offs. Beyond your ministerial and political contributions, I have deeply appreciated our personal friendship, and greatly benefitted from your advice. You were the one who in 2012 suggested that I venture into social media, which I had until then considered a foreign land, to engage an audience not likely to follow my speeches and statements in detail. Having now done it for eight years, I have found it a fascinating and worthwhile journey.

For the younger Ministers, you have been a role model and a source of sage advice. They look to you to learn not only how to solve difficult problems, but also your seemingly effortless way of explaining nettlesome issues to Singaporeans. I am thus happy that even after you retire, you have agreed to continue to be available to advise your successors on the issues that you have handled as a Minister, and to share with them your experience and wisdom.

On behalf of all Singaporeans, and especially your residents in Sembawang, I thank you for all that you have done for Singapore, and wish you a happy, healthy and well-deserved retirement.