Both nations 'natural partners' with warmth, respect and fondness for each other: PM Lee

Singapore and New Zealand yesterday signed a joint declaration to step up cooperation in four strategic areas, marking a milestone in their 54 years of diplomatic ties.

The Singapore-New Zealand Enhanced Partnership, which was two years in the making, paves the way for the countries to intensify collaboration in the areas of trade and economics; defence and security; science, technology and innovation; and people-to-people links.

The joint declaration was inked at the Istana by Prime Minister Lee Hsien Loong and New Zealand Prime Minister Jacinda Ardern, who was on her first official visit to Singapore.

PM Lee said the two countries are "natural partners" with warmth, respect and fondness for each other.

"We share similar strategic perspectives on the region, such as the importance of Asean centrality and an open and inclusive regional architecture. We both believe in trade liberalisation and support an open, rules-based international trading system," he said at a joint news conference yesterday.

In line with the Enhanced Partnership, five related agreements and memorandums of understanding were inked yesterday by senior officials from both countries.

Among them was the upgraded Agreement between New Zealand and Singapore on a Closer Economic Partnership, which builds on a bilateral free trade agreement (FTA) that took effect in 2001. This was Singapore's first FTA, and New Zealand's second such agreement. 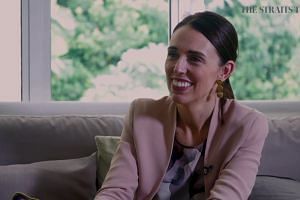 Calling yesterday's announcement a "significant step up" in ties, Ms Ardern said the closer economic partnership "smooths the way for New Zealand companies to capitalise on opportunities in Singapore".

Bilateral trade grew by 12 per cent last year. In his speech at an official lunch for Ms Ardern, PM Lee quipped: "All the kiwi fruit and manuka honey add up."

Ms Ardern also highlighted an agreement by both countries to collaborate in the field of science, technology and innovation, and which will be supported by NZ$57 million (S$51.3 million) in joint funding.

For a start, the countries will explore joint research programmes in the areas of data science and future foods, such as alternative proteins.

The other three agreements signed yesterday include one to promote closer cooperation and information sharing on cyber security, another to encourage greater interaction in the arts sector, and one to promote alliances between Singapore and New Zealand firms.

With the Enhanced Partnership, the Singapore Armed Forces and the New Zealand Defence Force will establish personnel and professional exchanges, among other initiatives.

The partnership will see the countries establish a reciprocal working holiday, for young people to undertake short-term work while holidaying in each other's country.

Singapore and New Zealand citizens will also be able to stay for 90 days in each other's country without having to apply for a visa in advance.

Nationals from both countries are now also able to use automated immigration clearance facilities when travelling to each other's country. This took effect on Feb 12.

New Zealand has a special place in the hearts of many Singaporeans, PM Lee said in his lunch speech.

"Many of us think that Bilbo Baggins carries a New Zealand passport. A good number visited 'Middle Earth', inspired by The Lord of the Rings movies. And each time the formidable All Blacks visit us... their Singaporean fans give them a roaring welcome," he said, noting that people-to-people ties between both countries are strong.

Ms Ardern attended a welcome ceremony at the Istana yesterday before she called on President Halimah Yacob and met PM Lee.

A version of this article appeared in the print edition of The Straits Times on May 18, 2019, with the headline 'S'pore, NZ to step up cooperation in four areas'. Subscribe
Topics:
More
Whatsapp Linkedin FB Messenger Telegram Reddit WeChat Pinterest Print Purchase Article Copy permalink