S'pore will work with NZ, other countries and service providers to tackle violent extremism

It also commits countries and online service providers to work together to tackle them, he said yesterday at a joint news conference with New Zealand Prime Minister Jacinda Ardern, who is on an official visit to Singapore.

The day before in Paris, Ms Ardern and French President Emmanuel Macron launched the Christchurch Call to rally governments and firms to commit to steps to deal with hateful and extremist content posted online.

The initiative comes in the wake of the killings at two mosques in New Zealand on March 15, during which 51 people died. The rampage was broadcast live by the gunman on Facebook, and clips were repeatedly uploaded and shared across different social media platforms.

PM Lee thanked Ms Ardern for her "leadership in rallying an effective international response to this serious issue".

Singapore takes this problem very seriously, he said, adding that the Republic will work with New Zealand, other countries and online service providers to tackle terrorism and violent extremism.

Asked if the Christchurch Call would also look at online falsehoods - on which Singapore passed a new law earlier this month - Ms Ardern said the initiative is "narrowly defined for good reason". 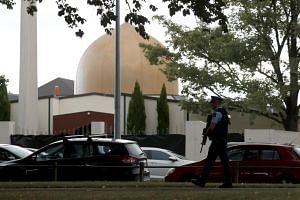 Lessons for social harmony from Christchurch and a cancelled concert

While a relatively small number of people viewed the live-streamed Christchurch attack, it was uploaded on Facebook 1.5 million times. On YouTube, it was uploaded at a rate of once per second in the first 24 hours, she noted.

"We felt a strong duty... to try and prevent that kind of situation ever happening again," Ms Ardern said.

"Our starting point has been to target violent extremism and terrorism online, and so the call is very focused on that," she added.

PM Lee was asked whether the new fake news law is consistent with the principles of free speech and an open and secure Internet.

Replying to the New Zealand Herald, PM Lee said the new legislation covers a serious problem of people putting up something online which is untrue and can spread rapidly.

If not contradicted, rebutted or demolished, such falsehoods can cause a lot of harm within hours, if not minutes, and thus require an immediate response.

"I don't see our legislation as being in any way restrictive of free speech," PM Lee added.

Noting that no free speech is absolute, he said the new law does not prevent people from saying things. Rather, it requires a correction to be put up, so the public will know the facts. If there is disagreement, parties can go to court.

PM Lee said the law is a "practical arrangement" to help Singapore tackle the problem of fake news.

"I am under no illusions that it will solve our problem because it is a very difficult problem to deal with," he said. "But we have to do this, and it is a step in the right direction."