Safeguarding social mobility even more important than reducing inequality, he says, as it gives all a fair chance

As Singapore progresses, it needs to also ensure the country's poor are not disadvantaged or left behind, Prime Minister Lee Hsien Loong said at a recent dialogue with Singaporeans.

Another important point he underlined is that in Singapore's meritocratic system, every effort should be made to bring everyone to a good starting point.

This would give everyone a fair chance to do well and compete, regardless of whether they are from rich or poor families, or whether their parents have connections or not, he added.

PM Lee was speaking to 530 grassroots leaders at a closed-door post-National Day Rally dialogue organised by the People's Association held on Oct 14.

Transcripts of his opening remarks and part of the question-and-answer session were released to the media yesterday.

A significant portion of his speech was on the hot-button issues of income inequality and social mobility, topics that have dominated the national discourse in recent years.

Inequality and the lack of social mobility are threats to the Government's objective of improving the lives of everyone, he said.

But inequality is not unique, he noted. It exists everywhere, and it has always existed in Singapore.

"In every society, there is a certain amount of inequality, and there is no society where the top and the bottom are the same," he said.

In Singapore, "if you look back 50 years, a lot of people were poor and lived miserably, and still there were rich towkays (business owners) and landlords. And there was a range from the rich to the poor ". 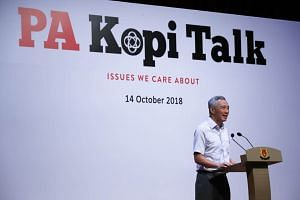 Lack of social mixing is a symptom of inequality, not a cause

Continue being inclusive as we work on social inequality

Over the years, he said, the Government has worked hard to lessen the inequality through a progressive income tax system and high-quality and affordable housing, education and healthcare for all.

"Because people can accept that some are rich, some are poor, provided if I am poor I have a chance to work hard and get better off."

That is what happened in the previous generation, and many successful people today came from poor families, PM Lee said.

"But if it is not like that, if people are poor, say, there is no hope, the doors are closed, that they will always remain poor, and their children too, no matter what they do, then I do not think people will accept it."

For that reason, a lot of government policies are targeted at preventing social stratification from taking root in Singapore, he said.

Citing pre-school education for all, he said the move is to ensure that if parents cannot afford to send their child to a "posh place, you still have a good and affordable pre-school which will bring you to a good point when you reach Primary 1, and you are at a good point to start your formal education''.

Similarly, HDB towns are designed such that rental blocks and sold flats of various sizes are mixed, so that people of different income groups get to interact, he said.

"Because we want high-and low-income families to live together side by side, get along with one another, interact," he said.

PM Lee also outlined how, in the past few years, the Government has been tackling issues of concern to Singaporeans.

These include improving the frequency and reliability of public transport, increasing the supply of new flats, building more hospitals and polyclinics to reduce crowding and waiting times, and improving the education system and making it more affordable.

He spoke about these issues at the National Day Rally in August, and reiterated to the grassroots leaders two broad messages from his Rally address.

Firstly, whatever difficulties Singaporeans face, no one is facing it alone.

"The Government understands people's concerns. We are working with you to tackle the problems together," he said.

Secondly, even as Singapore tackles these immediate problems, it has to look ahead and plan for the future.

"We cannot tell what the next 50 years will bring. We have had decades of peace in Singapore, (the Singapore Armed Forces) has not had to go to war, but we live in a troubled world, and the world faces many intractable global problems," he said.

Aside from external pressures, Singapore also has internal tensions that could stress its social fabric, he added.

"We will have to work very hard to stay together and to make sure this good work is not undone."

PM Lee added that social attitudes are just as important as government policies in tackling inequality and safeguarding social mobility.

"We want people to interact freely and comfortably as equals, and we must have regard and respect for one another, regardless of income or status," he said.

He also urged Singaporeans not to flaunt their wealth or success. "If you succeed, remember, it is not purely the result of your own hard work or even of your own talent. Because many others have helped you along the way."

Singaporeans have to maintain this spirit and social ethos, and remember how much they rely on one another, he added.

"If we do that, then people will say yes, SG100 means something. Work for it. Then Singapore can remain a united society, and we can realise our hopes and dreams for the next 50 years and much longer."

A version of this article appeared in the print edition of The Straits Times on October 23, 2018, with the headline 'S'pore must ensure no one is left behind as country progresses: PM'. Subscribe
Topics:
More
Whatsapp Linkedin FB Messenger Telegram Reddit WeChat Pinterest Print Purchase Article Copy permalink