Singapore and Malaysia are taking steps to defuse their air and maritime tensions, as foreign ministers on both sides reiterated their commitment "to preserving the vital relationship between both countries and to improving bilateral ties, on the basis of equality and mutual respect".

Both countries are locked in two separate disputes - over territorial waters off Tuas and airspace management over southern Johor.

On the air front, the ministers said yesterday that Malaysia will immediately suspend its permanent restricted area over Pasir Gudang for flights, while Singapore will do the same for new aircraft landing procedures for Seletar Airport.

The arrangement will be for a month, in the first instance.

In a joint declaration after a meeting in Singapore yesterday, Foreign Minister Vivian Balakrishnan and his Malaysian counterpart Saifuddin Abdullah stressed the need to keep the situation on the ground calm to allow discussions to take place.

They said the transport ministers of both countries should meet soon for discussions "to ensure the safety and efficiency of civil aviation".

On maritime issues, the ministers said a working group will be set up, headed by permanent secretary for foreign affairs Chee Wee Kiong and his Malaysian counterpart Muhammad Shahrul Ikram Yaakob.

It will study and discuss the legal and operational matters in order to de-escalate the situation on the ground, and provide a basis for further discussions and negotiations.

Addressing a joint press conference, both ministers stressed that Singapore and Malaysia have strong, close ties.

Malaysia and Singapore will always be close and permanent neighbours. That is a geographical fact. And it is essential that we always have a constructive and cooperative bilateral relationship.

Dr Balakrishnan said: "Malaysia and Singapore will always be close and permanent neighbours. That is a geographical fact. And it is essential that we always have a constructive and cooperative bilateral relationship. Both of us, my brother Saifuddin from Malaysia and I - we had a very positive, very constructive and very necessary meeting today."

The air disagreement first surfaced on Nov 23, when Malaysian carrier Firefly said it would suspend all flights to Singapore from Dec 1, the day it was supposed to move its operations from Changi to Seletar Airport. Malaysia objects to new landing procedures for Seletar, claiming they would impose height restrictions and affect developments in Pasir Gudang.

Singapore has, however, denied this, saying that the only change on introducing an Instrument Landing System (ILS) is that pilots will be guided using ground instruments so that they no longer have to rely on just their vision.

On Dec 25, Malaysia established a permanent restricted area for the purpose of military activities over Pasir Gudang. This means that flights from any country, including from Malaysia, would need prior approval from the Royal Malaysian Air Force to operate in that zone between 2,000 and 5,000 feet. 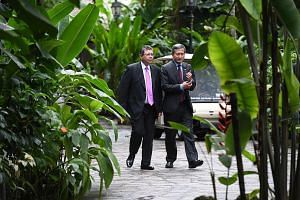 Singapore is concerned that the restricted area being in a "controlled and congested airspace" would impact the existing and normal operations of aircraft transiting through, the Transport Ministry said last week. The provision of air traffic services for the airspace over southern Johor had been delegated by Malaysia to Singapore in 1974. Malaysia now wants to take back the management of the airspace.

At sea, Kuala Lumpur had on Oct 25 unilaterally extended the port limits for Johor Baru port, such that they encroach on Singapore's territorial waters off Tuas. As a result, Malaysian government vessels had entered Singapore's waters.

The new boundary line extends beyond what Malaysia had previously claimed as its own waters in a 1979 map, which Singapore has never accepted. Singapore on Dec 6 extended its own port limits in response, to cover the full extent of the Republic's territorial waters.

The working group being formed to discuss issues surrounding the two port limits is to report to the foreign ministers within two months.

Said Mr Saifuddin: "We have a long history of good relations and there is only one way to go forward - that is to become stronger in our ties and improve in our relations."

Finance Minister Heng Swee Keat, who with Deputy Prime Minister Teo Chee Hean met Malaysian Prime Minister Mahathir Mohamad in Putrajaya on Dec 31 to discuss the disputes, said in a Facebook post: "As neighbours, Singapore and Malaysia have deep historical, economic, cultural, and people-to-people ties. It is important that we have a constructive and peaceful relationship and find win-win solutions that benefit the peoples of both countries."