SINGAPORE - There were no horns, party umbrellas or whistles on Nomination Day owing to the Covid-19 pandemic, but the battle for Singapore's 17 group representation constituencies (GRCs) served up some twists and 11th-hour surprises on June 30 as candidates from the 11 political parties headed into the nine centres around the island.

While the line-ups went largely to plan, the ruling People's Action Party (PAP) chose to beef up its teams with two big moves in hotly-contested constituencies in the east and west.

All 17 GRCs will be contested this time, with all but one seeing straight fights on Polling Day. Many of the constituencies have retained their anchor ministers from the PAP, but three of the hottest battlegrounds in East Coast, West Coast and Sengkang will see new ministers at the helm.

The biggest surprise came in the East Coast GRC, as Deputy Prime Minister Heng Swee Keat, who has been Tampines GRC MP since 2011, moved there to lead the team in what has been tipped to be the toughest fight in this election.

Mr Heng was spotted at the centre only at around 11.30am, half an hour before nominations closed, before his candidature was confirmed.

In his speech to voters on Tuesday (June 30), he said: "Covid-19 has plunged the world into a period of profound uncertainty with a major crisis on many fronts - healthcare, economic, social, and geopolitical. The People's Action Party has a plan to enable us to overcome this crisis, has a plan to emerge stronger from this."

He added in a Facebook post: "We cannot afford a gap in East Coast in these uncertain times. We need a full team that can take care of the residents and position them to come out of this crisis stronger than before."

WP has contested in East Coast in the last three elections and chief Pritam Singh, who is standing in Aljunied, said that Mr Heng's move was "an important signal that they (PAP) take our challenge in East Coast very seriously".

"I would say we take their challenge equally seriously and that's why we've put together a strong slate of candidates in the East Coast team," he added.

2. LEE JOURNEYS TO THE WEST

Another minister who made a big move on Tuesday was Minister for Social and Family Development Desmond Lee, the incumbent MP for Jurong GRC, who has joined the West Coast GRC team comprising Minister for Communications and Information S. Iswaran, Ms Foo Mee Har, Mr Ang Wei Neng - who also moved from Jurong GRC - and new face Rachel Ong.

The hotly-contested West Coast will see the two ministers and their colleagues going up against the Progress Singapore Party's (PSP) "A team" headed by its 80-year-old chief Tan Cheng Bock. The team includes PSP assistant secretary-general Leong Mun Wai, 60, and vice-chairman Hazel Poa, 50, a former secretary-general of the National Solidarity Party.

The contest in West Coast will also see former parliamentary colleagues Mr Iswaran and Dr Tan facing off in a constituency that the former has served in since 1997. The latter is back on familiar stomping ground as he was the PAP's MP for Ayer Rajah from 1980 to 2006 before it was merged with West Coast.

Mr Iswaran said in his speech: "We, as the team, have worked through the years to look after your needs, and care for you. Vote for us, your PAP team, so that we can continue to work together to protect our lives, our jobs, and our future."

Dr Tan said he would not question why the PAP had moved Mr Lee to West Coast, adding: "In politics, it's that way... But if they say I must be somebody quite good, quite strong, so they are trying to put all their heavyweights come to West Coast, well, that's good."

3. NO 'SUICIDE SQUAD' IN ALJUNIED

After a near-loss in 2015, where WP captured 50.95 per cent of the votes, the party is missing stalwart Low Thia Khiang and Chen Show Mao as both are stepping down.

WP candidates face uphill battle but will prove they are not pushovers, says Pritam Singh

It remains to be seen if WP's popularity will be hit by its legal troubles, as the High Court last October found that Mr Singh, Ms Lim and Mr Low had breached their duties to Aljunied-Hougang Town Council, which was said to have made millions in improper payments under their watch. The trio have appealed against the ruling.

Mr Singh said: "It's going to be a difficult election. There have been some commentaries in the media about the real risk of a wipeout.

"It took us 16 years (after independence) before one seat fell to opposition in 1981, and it took 23 years after the enactment of the GRC system for an opposition to break through in one GRC.

"It's an uphill battle and it's going to be a difficult fight. But we have to put people who are committed who can do the whole stretch."

While some commentators have called the PAP team a "suicide squad", Mr Lim Boon Heng, a former MP who is now an adviser for the GRC, disagreed. He said: "If it was a suicide squad, how did (the PAP team) pull off a marginal loss (in 2015)? It is about whether you have the heart to serve people."

The newly-formed Sengkang GRC is the scene for the fight between a PAP team led by labour chief Ng Chee Meng and WP's He Ting Ru. The constituency combines Sengkang Central ward from Pasir Ris-Punggol with Punggol East SMC and part of Sengkang West SMC, and covers the Anchorvale, Compassvale and Rivervale neighbourhoods.

They will come up against rival WP candidates He, economist Jamus Lim, 44, equity research analyst Louis Chua, 33, and social activist Raeesah Khan, 26. Aside from Ms He, the other three are newcomers taking part in their first election.

Single seats to watch include Bukit Panjang and Marymount

In his thank you speech to supporters, Mr Ng said: "We humbly ask for your support so that we, the PAP, can lead the country out of this crisis. Not just for ourselves, but for our children, our grandchildren. We want to ensure that every Singaporean has a good job, and can look forward to better jobs for the future."

"We want to walk with you, we want to engage you, so we can hear you and build a Sengkang town that is the most liveable place for all of us."

Mr Amrin added that "this time of crisis is not a time for experiment(ing)" as he noted that the PAP "have a good track record, and we have been on the ground".

Dr Lim, an associate professor of economics, said the WP would be sharing with residents the party's aspirations and vision for a "thriving, happy and inclusive society in Sengkang". He said: "We have listened as you shared with us your stories, your fears and concerns, and your dreams and hopes. This in turn has informed our ideas, plans and policies."

Both Punggol East and Sengkang West were contested by the opposition in previous elections, with the PAP's Charles Chong winning the former by a slim margin of 51.76 per cent in 2015 against WP's Lee Li Lian.

The Pasir Ris-Punggol GRC will be the stage for the first multi-cornered election fight in a GRC since 1992, with the PAP, Singapore Democratic Alliance (SDA) and Peoples Voice to contest the five-member ward.

Some pundits had expected a head-to-head tussle between PAP and the SDA, but Peoples Voice threw its hat into the ring with candidates Jireh Lim Kay Cheow, Prabu Ramachandran, Mohamed Nassir Ismail, Gilbert Goh Keow Wah and Vigneswari V. Ramachandran. 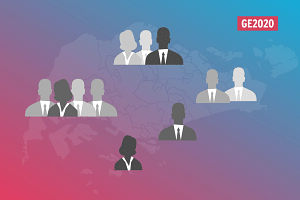 GE2020: Who is standing in your constituency?

For only the second time in Singapore's election history, Tanjong Pagar GRC will see a contest as the PAP team led by Minister for Trade and Industry Chan Chun Sing goes up against the PSP slate helmed by its organising secretary Michael Chua.