SINGAPORE - Drivers have saved more than $3.3 million in parking fees since October 2017, by paying via an app only for the minutes they used, instead of the full hourly or half-hourly rates.

The Parking.sg app was funded by the Municipal Services Productivity Fund, and its success is one reason the authorities will set aside another $25 million in the next five years for more such inter-agency collaborations.

Announcing the move in Parliament on Wednesday (March 6), Minister-in-charge of the Municipal Services Office (MSO) Grace Fu said she hoped to see more of such service improvements in the coming years.

The MSO was formed four years ago to coordinate multiple agencies' efforts in delivering municipal services.

Two new projects have hitherto been approved under the enhanced fund.

One is the use of drones for the Singapore Land Authority to detect maintenance issues early, more quickly and cheaply.

The other is a pilot trial of compactor litter bins for the National Environment Agency, a change that could cut waste collection from daily to twice a week.

Ms Fu, who is also Minister for Community, Culture and Youth, also said the office has awarded $5.2 million for six projects so far, and expects "about five times that in productivity gains". 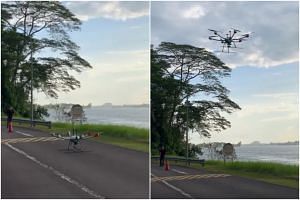 For one, it is using artificial intelligence to route cases to the right agencies automatically, "freeing up officers to focus their efforts on solving more complex problems", Ms Fu said. About 1,500 such cases a month are routed automatically.

Another area is through a new Infrastructure Works Dashboard - a common platform where agencies can access one another's proposed and ongoing projects, and coordinate works to minimise inconveniences like dust pollution and traffic jams, she said.

Also, the MSO will introduce new features into its OneService app, so that residents can use it not just to report problems, but also make transactions and encourage community bonding.

For example, residents can soon pay for neighbourhood facilities like barbecue pits and receive alerts like for hawker centre closures through the app, said Ms Fu.

"We also want to encourage residents to do their part in improving their living environment," she added, noting the HelpBuddy app pilot launched last year allows residents to take part in activities offered by agencies.

For now, residents can do things like check if gravitraps set up by the NEA to monitor the mosquito population are in good working condition.

"Going forward, we will enable residents to put up simple activities on the app. For example, residents can help spot missing pet dogs, or share household tools with one another," Ms Fu said. "If the pilot is successful, we will incorporate it in the OneService App."