SINGAPORE - The Ministry of Culture, Community and Youth (MCCY) does not favour individual sports over team sports, and objectively assesses national sports bodies' development plans and targets, as well as performance and potential of their athletes.

That was Minister for Culture, Community and Youth Grace Fu's reply in Parliament on Monday (Aug 6) to Dr Lim Wee Kiak's question on MCCY's policy on assisting Singaporeans who seek national service deferment, to pursue their sporting ambition.

"For team sports, we have to adopt a whole-team development strategy which covers the entire squad of athletes, beyond just an individual athlete," said Ms Fu.

"We have several considerations when we assess our support for NS-liable athletes involved in team sports. For example, we look at the robustness of the national sports association's (NSA's) development plans for the team, whether there is a clear target of a Major Games competition in sight and the plans to achieve this, as well as the individual athlete's role and potential contribution to the national team."

Mindef's decision to reject Benjamin's application for deferment has sparked debate on whether athletes from team sports are disadvantaged compared to those from individual ones.

Only three sportsmen - swimmers Joseph Schooling and Quah Zheng Wen, and sailor Maximilian Soh - have been granted long-term deferment from NS, and all three trained and competed at the Olympics. 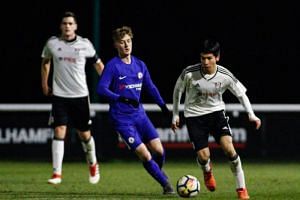 Ben Davis is playing for Fulham as an English national, not as a Singapore citizen: Ng Eng Hen

Ms Fu said that the potential and motivation of the athlete, his training and development plan, how he is being developed to progressively achieve personal bests and breakthrough performances, and how the two-year stint in NS affects the athlete, are among some of MCCY's considerations.

"MCCY recognises the power of sport in inspiring the nation and engendering a sense of national pride," she added.

"Through Sport Singapore and its partners including Singapore National Olympic Council, the NSAs, the Singapore Sports School, and the National Youth Sports Institute, the High Performance Sports (HPS) system has been established to support our athletes to reach their fullest sporting potential."