SINGAPORE - Teenage footballer Benjamin Davis is playing for English Premier League club Fulham FC as an English national, not as a Singapore citizen.

That was one of three reasons why the Ministry of Defence (Mindef) rejected the application for national service deferment made for the 17-year-old by his father Harvey Davis, Defence Minister Ng Eng Hen said in his reply to questions in Parliament on Monday (Aug 6).

Benjamin signed a two-year professional contract with English Premier League club Fulham FC in June. He had left Singapore to join the club's academy in 2017.

In his profile on Fulham's website, Benjamin is said to "hail from Singapore", but his nationality is listed as English.

The second reason is that the senior Davis had "consistently refused to indicate" when his son would return to do NS, if deferred. Davis said this was because there are "a lot of variables all dependent on his development and progression".

Third, Mindef said Davis indicated that Benjamin would still sign the contract with Fulham if deferment was not granted - as he did - and would consider the option for his son to renounce his Singapore citizenship in order to pursue his career.

"To grant deferment to Mr Ben Davis to pursue his personal development and professional career would be unfair to the many others who have served their NS dutifully as required, and not at a time of their choosing," said Dr Ng. 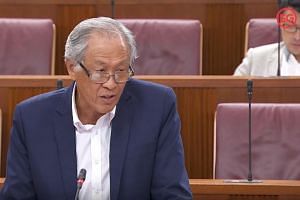 "The application by Mr Harvey Davis for his son's deferment is to further his son's professional career first and to the longest extent possible."

"He has been quite open about this. Singapore and her interests, including his son's NS obligations, are secondary consideration, if at all."

Dr Ng added there had been "no indication, commitment or plans" as to how Benjamin signing for Fulham would help raise football standards in Singapore, if deferred.

However, Davis had said his son would serve as an inspiration for the students registered to JSSL Singapore, a youth football academy he runs.

"To preserve equity for all national servicemen, Mindef will only defer individuals very selectively if their deferment serves Singapore's interest first and foremost, never their own," said Dr Ng.

This was the only basis to grant deferment to three sportsmen - swimmers Joseph Schooling and Quah Zheng Wen, and sailor Maximilian Soh - for them to train and compete at the Olympics.

In all three cases, clear expectations were laid out when deferment was given, in discussion with the Ministry of Culture, Community and Youth (MCCY) on the standards required for their training. If they do not meet the standards agreed upon, deferment would be curtailed.

He said: "Some wanted to complete their university degree first before NS. Others said they had to support their families.

"In every judgment, the courts dismissed these personal reasons, convicted and sentenced them to jail terms.

"Harsh as it is, the Enlistment Act is blind to 'personal convenience and considerations', no matter how talented the individual or exceptional his circumstances."

Dr Ng also added that Mindef has provided support to national sportsmen, and revealed that 10 athletes have been given either a short postponement of their enlistment, or time off if they have already enlisted, to train for the Aug 18-Sept 2 Asian Games in Indonesia.