SINGAPORE - Transport Minister Khaw Boon Wan, who is nursing a fractured left arm, had injured it after he hastily jumped out of bed to get to the toilet, he shared on Sunday morning (March 24).

Speaking to his residents at the Women's Festival at Kampung Admiralty - his first appearance in a grassroots event since his accident in February - the Sembawang GRC MP used his painful experience as a cautionary tale about the dangers of getting up quickly and falling.

Mr Khaw, 66, who is still on extended medical leave, said the accident happened at around midnight while he was in bed, and he had an urge to visit the toilet, he said.

He added that he had been coughing very badly at the time.

"My wife was sleeping very well, and I am a very good husband, so I did not want to disturb her," he recounted. "I knew I should not have jumped out of bed, but I did so anyway."

His haste backfired and Mr Khaw fell, creating a loud bang that woke the family up. They phoned for an ambulance.

"I have never experienced so much pain! The doctors told me this type of fracture, the pain is more painful than delivering babies, but I said I don't know because I never had that experience. But I can tell you it is very painful," he said. 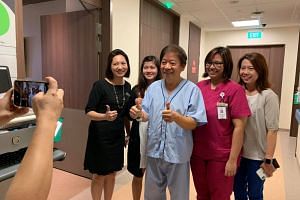 'I am going #home!': Khaw Boon Wan discharged one week after arm surgery

Mr Khaw was warded at the Singapore General Hospital for around two weeks and underwent a three-hour surgery on his fractured left arm. Doctors had fixed his broken arm in place with a piece of titanium plate, he said.

"But old bones take time to join together, and I need another one month," he said.

The doctors also believed that Mr Khaw had fainted while getting up quickly at night, leading to his fall.

While in hospital, Mr Khaw said he received many well-wishes and prayers from his residents, and tried to "reply to almost every Facebook comment because I had plenty of time in the hospital".

He thanked his residents and wanted them to learn from his experience: "Those of you working, especially in the toilet, in the bathroom, or if you are working in the kitchen and it is very slippery, be very careful."

This is why the Housing Board has the Enhancement for Active Seniors (EASE) programme, which subsidises the installation of elderly-friendly features at home, he noted.

Mr Khaw said his hospitalisation experience also taught him that one in three Singaporeans above 65 suffer from falls.

"That is a very high frequency. It is miserable for yourself, for your family and also to the Government because when you stay two weeks in the hospital, it is a lot of subsidy.

"The best thing is to not fall."