SINGAPORE - Nominations closed on Tuesday (Sept 1) with no big surprises to the party line-ups for the Sept 11 General Election.

Last-minute changes which some thought might happen in Aljunied GRC did not materialise.

The only surprise was in MacPherson SMC which will see a three-cornered fight after former Singapore Democratic Party (SDP) MP Cheo Chai Chen decided to contest the ward under the National Solidarity Party (NSP) banner. 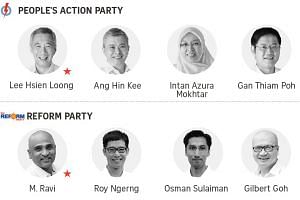 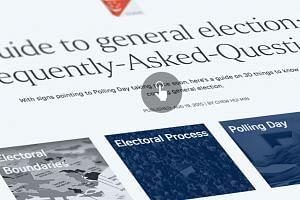 While there were few surprises in terms of the candidate line-ups, there was a last-minute scramble at Bendemeer Primary School when the nomination papers for the Singaporeans First (SingFirst) party were put up.

SingFirst party chief Tan Jee Say's team missed out on filling in the electoral division that they will be contesting on their nomination forms. The former presidential candidate is contesting the five-seat Tanjong Pagar GRC with Dr Ang Yong Guan, Mr Chirag Desai, Mr Melvyn Chiu and Mr Fahmi Rais.

The problem was resolved when the forms were corrected manually.

Over at Holland-Bukit Timah GRC, SDP's Dr Chee will lead a team to challenge the PAP incumbents led by Minister for Environment and Water Resources Vivian Balakrishnan.

The Sept 11 election will be the first that Dr Chee is set to contest since 2001. He could not be fielded in 2006 and 2011 because he was declared bankrupt after failing to pay $500,000 in damages for defaming then-Senior Minister Lee Kuan Yew and then-Prime Minister Goh Chok Tong during the 2001 general election. He was cleared of bankruptcy in 2012.

With nominations closed at noon on Tuesday, it is now confirmed that all 89 seats in the 29 electoral divisions - 16 GRCs and 13 SMCs - will be contested, making it Singapore's most hotly contested general election since 1965.

In the last general election in 2011, 82 of 87 seats in Parliament were contested. The only walkover was the five-member Tanjong Pagar group representation constituency (GRC) helmed by founding Prime Minister Lee Kuan Yew, who died in March this year.

In the 2011 election, the PAP got a record low vote-share of 60.1 per cent. It also lost six seats - the Hougang single ward and the five-member Aljunied GRC. It further lost the Punggol East single ward in a by-election in 2013. All were won by WP.

Prime Minister Lee Hsien Loong has described the coming election as a crucial one that will set the direction for Singapore over the next 50 years.

Meanwhile, WP's Mr Low told reporters that his party hopes that this election will make Singaporeans more aware of their future and "what they should decide for themselves”.

Analysts have identified several constituencies as potential hot seats in this election.

In Fengshan, which was carved out of East Coast GRC, PAP new face Cheryl Chan will be up against WP newcomer Dennis Tan.

The choice of Ms Chan, a party volunteer, has surprised some because it is the first time in nearly three decades that the PAP is fielding a first-time candidate to run solo in a new SMC.

East Coast GRC, anchored by PAP's Manpower Minister Lim Swee Say, is also seen as a hot seat because it saw the narrowest win for a GRC for the party in the last election in 2011, with just 54.8 per cent of the votes.

The PAP team will be challenged by a WP team led by Non-Constituency MP Gerald Giam and including newcomers Dr Daniel Goh, Mr Fairoz Shariff and Mr Leon Perera.

Pundits are also watching the contest in the WP-held Punggol East SMC.

The PAP has fielded veteran MP Charles Chong for Punggol East, in the hope of wresting back the constituency it lost in the 2013 by-election. Mr Chong will face WP incumbent Lee Li Lian.

Addressing supporters at Fengshan Primary School after nominations closed, Ms Lee said: "In the 2013 by-election, you gave me the mandate to represent you in Parliament. Come Sept 11, vote for me."

Her challenger, Mr Chong, said: "We must win Punggol East back for our families, our neighbours, our future."

On Tuesday, candidates and their supporters started early in preparation of Nomination Day.

Although the nomination centres opened only at 10am, they started to gather at the respective party headquarters and other meeting points as early as 8am.

At the PAP's Punggol East branch office, more than 20 supporters of Mr Charles Chong gathered at about 8.20am for breakfast.

Mr Chong arrived shortly after and the group left for their nomination centre at Fengshan Primary School in a bus. Asked whether he is confident of wresting back the opposition-held Punggol East SMC, he said: "The voters will decide."

Over at the PAP's Marine Parade branch office, Emeritus Senior Minister Goh Chok Tong was welcomed by about 80 singing supporters upon his arrival at 8.30am.

Activists and supporters at other PAP branch offices across Singapore were also busy preparing election posters while the candidates checked their nomination papers before setting off for their nomination centres.

Over at the opposition camp, candidates also gathered early.

Mr Low, the WP chief, arrived at the party's Hougang Town Council at around 9am with little fanfare. He mingled with supporters and spoke to the parents of fellow Aljunied GRC MP Faisal Abdul Manap. The Aljunied GRC team left for Raffles Institution soon after.

The Singapore Democratic Alliance (SDA) team, which will contest Pasir Ris-Punggol GRC, met at Changi Road to do final checks on their papers at 8.30am.

SDP chief Chee Soon Juan arrived at the party's headquarters with his wife at around 9am.

Mr Goh told reporters: "Our team is a team of laymen. We represent the voices of the people, and I think that's what most people want."