No requirement for by-election when a single vacancy arises in a GRC, says court

Singapore's apex court has dismissed an appeal for the remaining three MPs in Marsiling-Yew Tee GRC to vacate their seats, and for a by-election to be called in the constituency.

But the Court of Appeal has reversed an earlier High Court decision that the appellant, Dr Wong Souk Yee, a resident in the group representation constituency, had to pay costs of $10,764.35 to the state, saying a serious question of constitutional law was being raised in her appeal.

In giving its decision in a 40-page written judgment, released yesterday, the Court of Appeal said the Government is not duty-bound to call a by-election when a single vacancy arises in a GRC.

This was also Parliament's intention when it amended the Constitution in 1988 to introduce the GRC scheme, the five-judge court noted.

The appeal for a by-election to be called in Marsiling-Yew Tee GRC was filed by Dr Wong, after the High Court dismissed her case last April.

Dr Wong, who is assistant treasurer of the opposition Singapore Democratic Party (SDP), was part of the party's team that contested in the same GRC in the 2015 general election.

She had contended that the GRC seat vacated by then Speaker of Parliament Halimah Yacob, who resigned in August 2017 to run in the presidential election, must be filled under the law. 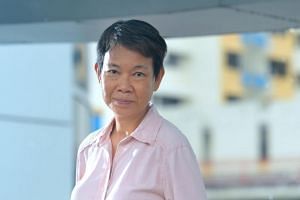 Among the arguments made by her lawyers is Article 49(1) of the Constitution, which states that when "the seat of a Member... has become vacant for any reason other than a dissolution of Parliament, the vacancy shall be filled by election".

The Court of Appeal, which had heard her appeal in January, said in its judgment that the proper interpretation of the words "seat of a Member" refer only to the seat of a single-member constituency member.

It found that Article 49(1) was "ambiguous in relation to whether and how it applies to GRCs" since it was enacted in 1965, when the concept of GRCs did not exist.

The Constitution is "conspicuously silent and does not expressly compel the other Members of the affected GRC to vacate their seats", in a situation where a single seat in a GRC has been vacated, the Court of Appeal said.

Having all the members vacate their seats is a necessary precondition for any by-election in a GRC to be held.

Looking at the relevant parliamentary debates in January 1988, the Court of Appeal said it is clear that Parliament had decided the Government was under no obligation to call a by-election in a GRC when a single vacancy arises.

This - Parliament decided then - was preferable to the alternative, which was the possibility that one Member in a GRC team could hold the rest in the team to ransom.

After GRCs were legislated in May 1988, it was introduced in the general election in September that year, with 13 GRCs carved out.

The court also rejected Dr Wong's argument that the purpose of the Constitution's Article 39A - which governs the GRC scheme - would be undermined when a minority Member of a GRC vacates his seat and minority representation in Parliament would be diminished.

This argument ignores the fact that Parliament, in debating the changes to the law, had specifically considered the risk of minority representation being diminished, the court said.

Parliament "had decided that this risk was an acceptable trade-off for preventing a Member of a GRC from otherwise being able to hold the rest of the Members of that GRC to ransom", it added.

The court also rejected Dr Wong's argument based on voters' "implied right to representation in Parliament" which, among other things, relied on Article 39(1)(a) of the Constitution.

She said the Article provides evidence that voters have the right to be represented by the full slate of elected Members returned at each general election.

But the court said the law is not a provision that deals with how midterm vacancies are to be filled, nor is it about by-elections. "Rather, it is meant to be descriptive of the composition of Parliament."

SDP chief Chee Soon Juan said of the judgment: "The SDP deeply regrets this decision by the appeals court."

He wrote in a Facebook post yesterday: "Singaporeans should be able to expect that each and every MP who vacates his or her seat should be replaced by an election. This is the bedrock upon which democracy is built."

Following the resignation of Madam Halimah, who is now the president, the remaining MPs in the GRC are National Development Minister Lawrence Wong, Mr Ong Teng Koon and Mr Alex Yam.

Minister of State for National Development and Manpower Zaqy Mohamad, from Chua Chu Kang GRC, has taken on the role of grassroots adviser to Marsiling, the ward where Madam Halimah had served.