SINGAPORE - The High Court has dismissed a legal challenge that called for three MPs to vacate their spots in Marsiling-Yew Tee GRC, and for a by-election to be held.

Singapore Democratic Party (SDP) assistant treasurer Wong Souk Yee had made the application to the High Court after Madam Halimah Yacob resigned as an MP from the constituency to run in the September presidential election, which she won in a walkover.

Speaking to reporters after the ruling, SDP chairman Paul Tambyah said that SDP is "very disappointed" with the ruling. The party will study the judgment and consult with Dr Wong and her lawyer Peter Low on whether to appeal against it.

In his ruling on Monday (April 9), Justice Chua Lee Ming said that there is no legal provision for the sitting MPs in a GRC to be compelled to vacate their seats in Parliament, when only one spot has been left empty in their GRC.

He also disagreed with Mr Low's claim that there was inconsistency between the Constitution and the Parliamentary Elections Act.

Mr Low argued that if a by-election is not called, the Parliamentary Elections Act should be interpreted such that all MPs of the GRC have to leave their spots when one or more seats are left empty, or when no remaining MP is a minority candidate.

He cited Article 49(1) of the Constitution, which states that when "the seat of a Member... has become vacant for any reason other than a dissolution of Parliament, the vacancy shall be filled by election". 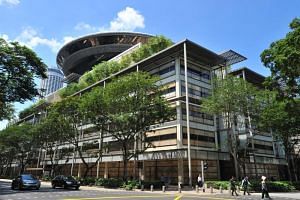 But the judge, who heard the application on January 22, rejected Mr Low's interpretation of Article 49(1). An "immediate hurdle" that Dr Wong faces under this interpretation is the fact that a by-election for the whole GRC team cannot be held unless the remaining MPs leave their seats, he said.

Furthermore, the Constitution does spell out - in Article 46(2) - the circumstances under which a seat becomes vacant,and none of them apply to the remaining MPs in Marsiling-Yew Tee GRC, said Justice Chua.

These circumstances include an MP losing or giving up his Singapore citizenship, or an MP leaving the political party which he had stood for in the election.

Justice Chua concluded that there is no legal basis to require the rest of the MPs to vacate their seats in Marsiling-Yew Tee GRC, adding the alleged inconsistency between the Constitution and the Parliamentary Elections Act does not stand.

"The applicant's argument is simply that because Article 49 (1) has triggered a by-election in the present case, the remaining MPs must vacate their seats by resigning because otherwise a by-election cannot be held. In my view, this is a circuitous argument," he noted in his judgment grounds.

He also disagreed with Mr Low's argument that a by-election must be held as voters have lost their right to be represented by an elected MP of their choice. It is the GRC team that represents the GRC in Parliament, he said, and voters continue to be represented by the team, " albeit comprising one MP less".

The ruling preserves the legal status quo, which requires by-elections when single seats are vacated, but not when one MP in a GRC leaves the seat. In a GRC, by-elections are required only when all MPs vacate their seats.

This is the first time a legal challenge has been mounted to determine whether a by-election is mandatory when a seat has been vacated in a GRC.

A previous challenge involved a single seat, after the Workers' Party's Hougang seat was vacated in 2012 when MP Yaw Shin Leong was expelled from his party. The court ruled in that case that the prime minister has to fill a vacated single seat, though there is no explicit deadline for doing so.

SDP previously called the People's Action Party's (PAP) decision not to call a by-election unconstitutional. When Madam Halimah left the GRC to run for president, MP Zaqy Mohamad from neighbouring Chua Chu Kang GRC was appointed to take on the additional role of grassroots adviser to the ward she had been serving in.

Although SDP pulled out of the legal challenge last November when the Attorney-General argued it had no standing in the issue, Dr Wong, who is a resident of the GRC, remained as sole plaintiff.

Dr Wong was not in court during the hearing. SDP's secretary-general Chee Soon Juan and Dr Tambyah were present.