SINGAPORE - What a senior accountant deemed to be wrongful payments to a managing agent by a Workers' Party-led town council was also practised by its People's Action Party (PAP) predecessors.

This was among the reasons laid out by Senior Counsel Chelva Rajah on Monday (Oct 8) and which he said led to the more than $1.2 million Aljunied-Hougang Town Council (AHTC) made to its managing agent, FM Solutions & Services (FMSS), being wrongly classified as "improper".

He was cross-examining KPMG executive director Owen Hawkes, in the second half of Day 2 of a multi-million-dollar civil suit over improper payments involving three WP MPs, including former chief Low Thia Khiang.

Mr Hawkes' firm was appointed to look into AHTC's books after the Auditor-General's Office found significant governance lapses in a special audit.

At issue during Monday's cross-examination was whether FMSS had received more than $1.2 million in extra payments, through the form of a 3.5 per cent management fee levied on projects totalling more than $34 million.

KPMG believed that many of the projects, including the repair and redecoration of Housing Board flats, were basic services, which should have been covered by a lump-sum fee. 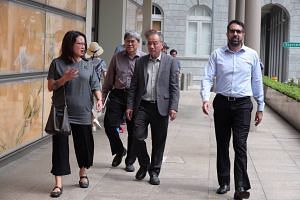 But Mr Rajah questioned how Mr Hawkes arrived at this conclusion, since he admitted he had never gone down in person to evaluate the complexity of the projects, but relied on the wordings in the contracts.

Mr Hawkes replied: "That's correct and it wouldn't be the first case (where a client has disagreed with an accountant's definitions)...Our view was that this fell under basic services, at least in part."

At one point during the cross-examination, Mr Rajah also questioned if the auditors had come into the special audit with a pre-conceived view. He asked Mr Hawkes: "What is your approach: Guilty until proven innocent or innocent until proven guilty?'

Mr Hawkes replied this was a civil case, and hence there was no issue of innocence or guilt.

Mr Rajah also sought to establish that AHTC was warranted in paying these fees, especially as some of the projects were complex enough to cost $8 million each.

Both men were locked in a back-and-forth over whether the total bill size was a fair indicator of the complexity of a project.

Mr Hawkes said the "mere scale" of the project was not sufficient, and that it depended on the "nature of what's being done."

Mr Rajah shot back: "So size means nothing?"

In his cross examination, Mr Rajah also quizzed Mr Hawkes on another KPMG's finding in its October 2016 report - that AHTC had overpaid FMSS $8,990 for overtime claims and Central Provident Fund (CPF) contributions.

This amount comprised $7,322 for general overtime and $1,668 for inspections during Chinese New Year amounting to $1,668. KPMG deemed them as "improper" because these services should have been considered as part of the standard management fees payable by the town council.

Mr Rajah said the inspections were required during the festive period because the council wanted to ensure that waste was being managed and cleared expeditiously. He added that special approval had been given, and recorded in the minutes of a meeting with the council's chairman, for the payments.

Mr Rajah also said that the town council was going through an "intensive and rigorous" audit by the Auditor-General's Office (AGO) then, requiring staff to have to liaise with the AGO, and go "over and above" their duties.

Mr Hawkes countered that there was a distinction to be drawn, for example, as to whether FMSS' finance staff should be reimbursed for the extra hours by their employer and whether FMSS is entitled to recover all the overtime from AHTC.

The question is the degree of the "extensive liaison" with the AGO, he added.

Also raised during the cross-examination was KPMG's finding that close to $195,000 had been paid to FMSS and service provider FM Solutions and Integrated Services (FMSI) between May 2011 and July 2011, which were not supported by certifications that they were in conformity with applicable contracts.

Mr Hawkes said a letter of intent - signed on June 15, 2011 between FMSS and AHTC - was for FMSS to take over all of the Hougang Town Council's (HTC) staff in preparation for the merger to become AHTC.

HTC appeared to have no managing agent for a month until July 15, 2011, which was when the first contract between FMSS and AHTC took effect, Mr Hawkes said.

The trial continues on Tuesday (Oct 9).