Here's a look at the new measures:

1. The deadline for PMDs to comply with UL2272 standards will be brought forward six months to July 1, 2020. The previous deadline was Dec 31, 2020. First announced in September 2018, the UL2272 certification process looks at fire and electrical safety of PMDs.

2. Registered e-scooters must undergo compulsory inspection from April 1, 2020. This inspection is required by the Land Transport Authority (LTA ).

All new e-scooters will have to pass inspections of their weight, width and speed, as well as adherence to UL2272 standards, before they are registered.

Currently, users just have to declare their e-scooter's adherence to rules - such as that the maximum weight is no more than 20kg and the top speed is 25kmh - when registering their devices with the LTA.

3. The LTA is working with the National Environment Agency to encourage the safe, early disposal of non-UL2272 certified devices. Details will be announced later.

4. About $50 million is to be spent on expanding the infrastructure for active mobility devices like PMDs, and hastening the improvement of infrastructure in hot spots where accidents occur. These improvements include widening footpaths, installing warning signs as well as speed-regulating strips on paths to slow down PMDs.

5. The 15 People's Action Party town councils will ban users from riding their PMDs at the void decks and common corridors of Housing Board blocks.

6. A three-month trial of pedestrian-only zones where PMD riders must dismount and push their devices will be carried out at the town centres of Ang Mo Kio, Bedok, Bukit Batok and Khatib, as well as a neighbourhood centre in Tampines. 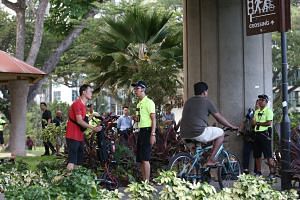 15 town councils to ban use of PMDs in void decks; $50m to be spent improving infrastructure

PMD penalties being monitored, will be increased if needed

7. A trial of School Zone markings on footpaths outside some schools is to start by September. These include speed-regulating strips, "slow" markings, and "enhanced visual cues" on the ground to remind PMDs to slow down. These have been introduced at Fern Green Primary School, and will be introduced at four other schools - Fengshan Primary, Jiemin Primary, Rivervale Primary and Yishun Secondary.

Enforcement team to be doubled

10. The LTA's active mobility enforcement team will be doubled to about 200 by year's end.