TAIPEI (NYTIMES) - When Keziah Daum wore a Chinese-style dress to her high school prom in Utah, it set off an uproar - but not because of its tight fit or thigh-high slit.

After Daum, 18, shared pictures on social media of her prom night, a Twitter user named Jeremy Lam hotly responded in a post that has been retweeted nearly 42,000 times.

"My culture is NOT your... prom dress", he wrote, adding profanity for effect.

"I'm proud of my culture," he wrote in another post. "For it to simply be subject to American consumerism and cater to a white audience, is parallel to colonial ideology."

Other Twitter users who described themselves as Asian-American seized on Daum's dress - a form-fitting red cheongsam (also known as a qipao) with black and gold ornamental designs - as an example of cultural appropriation, a sign of disrespect and exploitation.

When the furore reached Asia, though, many seemed to be scratching their heads. Far from being critical of Daum, who is not Chinese, many people in mainland China, Hong Kong and Taiwan proclaimed her choice of the traditional high-necked dress as a victory for Chinese culture.

"I am very proud to have our culture recognized by people in other countries," said someone called Snail Trail, commenting on a post of the Utah episode by a popular account on WeChat, the messaging and social media platform, that had been read more than 100,000 times.

"It's ridiculous to criticize this as cultural appropriation," Zhou Yijun, a Hong Kong-based cultural commentator, said in a telephone interview. "From the perspective of a Chinese person, if a foreign woman wears a qipao and thinks she looks pretty, then why shouldn't she wear it?" If anything, the uproar surrounding Daum's dress prompted many Chinese to reflect on examples of cultural appropriation in their own country.

"So does that mean when we celebrate Christmas and Halloween it's also cultural appropriation?" asked one WeChat user, Larissa.

Others were quick to point out that the qipao, as it is known in China, was introduced by the Manchus, an ethnic minority group from China's northeast - implying that the garment was itself appropriated by the majority Han Chinese. In its original form, the dress was worn in a baggy style, mostly by upper-class women during the Qing dynasty, which ruled China for more than 250 years, until 1912. 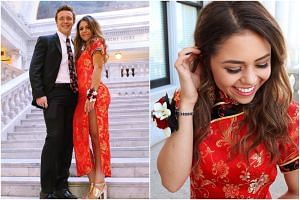 My culture is not your prom dress: US teen's qipao sparks 'cultural appropriation' row on Twitter

Fashion becomes a victim of its own oversharing

It was only in the 1920s and '30s, when Western influence began seeping into China, that the qipao was reinvented to become the seductive, body-hugging dress that many think of today.

For many cinephiles, it has become inextricably associated with Maggie Cheung, the actress who wore a stunning array of cheongsams in Wong Kar-wai's 2000 film In the Mood For Love.

These days, it is rare to see Chinese women wearing qipaos in the street. Western "fast fashion" has taken over, though the qipao has made something of a comeback among some official figures, like the country's first lady, Peng Liyuan.

"To Chinese, it's not sacred and it's not that meaningful," said Hung Huang, a Beijing-based writer and fashion blogger, in an interview. "Nowadays, if you see a woman wearing a qipao, she's probably a waitress in a restaurant or a bride."

Back in the United States, Daum, overwhelmed with the sudden wave of both praise and condemnation, was not backing down.

"To everyone who says I'm ignorant, I fully understand everyone's concerns and views on my dress," she wrote on Twitter. "I mean no harm. I am in no way being discriminative or racist. I'm tired of all the backlash and hate when my only intent was to show my love."