SINGAPORE - Winter is coming, but here is some whisky to warm you up before the final season of Game Of Thrones.

Best-selling whisky brand Johnnie Walker announced the release of its limited edition White Walker scotch malt whisky on Wednesday (Oct 14), inspired by the fearsome White Walkers of the hit HBO television series, which returns for its eighth season in April 2019.

The scotch whisky, which comes in a blue and white bottle, sees Johnnie Walker's iconic striding man logo modified to have a blue glint in his eye and wearing the armour of the Night King, the leader of the humanoid White Walkers who terrorise the realm of humankind in the fantasy drama.

Just like the icy, army of the undead, the whisky is meant to be served cold and directly from the freezer. Using temperature-sensitive ink, the bottle reveals the message "Winter is Here" once it is frozen.

The scotch, which is described by Johnnie Walker as having "notes of caramelised sugar and vanilla, fresh red berries with a touch of orchard fruit", was created by whisky specialist George Harper from Johnnie Walker parent company Diageo, alongside a team of blenders.

In keeping with the Game Of Thrones theme, some of the single malt whiskys in the blend were sourced from the northernmost distilleries in Scotland, such as Cardhu and Clynelish.

"Whiskies from Clynelish have endured long, Scottish winters, not dissimilar to the long periods endured by the Night's Watch who have ventured north of the wall, so it was the perfect place to start when creating this unique whisky," says Mr Harper. 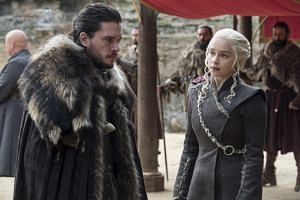 What we know about the Game Of Thrones epic final season

White Walker by Johnnie Walker is available for pre-order in Singapore at 1855 The Bottle Shop,  with the first 50 pre-orders receiving exclusive invitations to a series of upcoming White Walker parties.