SEOUL - When the woman woke up, she found out she was naked and singer Choi Jong-hoon was beside her.

The woman, who was just identified as A, told a Korean cable show that after chatroom messages linked to several K-pop artists surfaced recently, she suspected that she could be the person mentioned in the messages.

After verifying the facts with the reporter who broke the scandal, A is now convinced she was gang-raped by five men, including Choi and singer Jung Joon-young, whom she had known since 2012.

She now intends to file a lawsuit against them.

According to portal allkpop, the incident happened in 2016 after she blacked out after drinking with the five men.

When she woke up, she said: "Jong-hoon was next to me laughing. Since I was naked, I asked: 'What's going on?' They said: 'You don't remember?' and laughed."

She thought she could have lost consciousness because she was taking panic-disorder medication then.

She did not know how to confront the men over what might have happened. 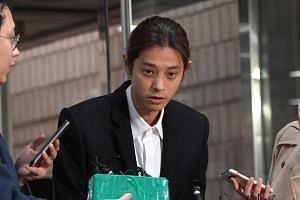 Jung Joon-young first to be charged in K-pop scandal

More K-pop artists to be arrested over scandals?

After the incident, she said the men still kept in contact with her, acting as though nothing improper had taken place.

She added that after the scandal broke, she realised that "even though I considered them friends, it wasn't the same for them. I can't help but think they simply treated me like an object. I was ashamed".

Though she wants them to be punished, she is also wary of the legal process, saying: "I don't know what will happen to me if they say they didn't do anything.

"I'm scared my identity will be exposed, and people will know I was a victim."

Meanwhile, Choi has denied the rape allegation but admitted that he and A were together on that day in 2016.

Jung, who was arrested recently, has been charged for taping women in sex acts and sharing the footage.