SINGAPORE - The nightlife scene here is about to get a big boost with the Republic's largest nightclub, Marquee Singapore, opening its doors on April 12 at The Shoppes at Marina Bay Sands (MBS).

Coming in at 2,300 sq m and spanning across three storeys topped by a 30m-high ceiling, the party playground will house an eight-armed indoor ferris wheel - with a photo booth in each pod- offering views of the dance floor. A three-storey-high slide will also add to the carnival-like atmosphere.

The space - formerly occupied by one of MBS' theatres - is more than twice as large as Zouk in Clarke Quay, and Ce La Vi on the rooftop of MBS, which are both about 900 sq m.

Marquee Singapore is the latest in a line of outposts established by the long-running Marquee New York, which opened its doors in 2003. The club, owned by Tao Group - one of the United States' leading nightlife, entertainment and dining businesses - also has outlets in Las Vegas and Sydney.

As part of the opening, there will be a red carpet event, as well as a slew of internationally-acclaimed DJs taking to the decks. The line-up is yet to be announced, although Marquee's outlets have been known to play host to the likes of DJs such as Armin Van Buuren and Kaskade and rappers Post Malone and Travis Scott.

The club component of Marquee is part of a multi-concept entertainment and dining destination that will also house Avenue, a speakeasy-style lounge set to open in May, as well as Koma, a Japanese eatery and sushi bar, which will open within the year.

Koma is an entirely new dining concept for Tao Group. 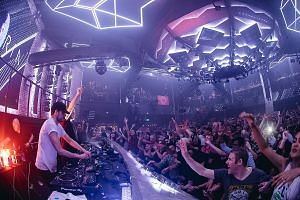 Avenue, on the other hand, is a club concept that originated in New York in 2009. The celebrity haunt also opened in Los Angeles in 2017. With features such as a mini bowling alley and an arcade with vintage pinball machines, and a slant towards hip-hop and rock-n-roll music, it will be a more exclusive and intimate space than the main Marquee nightclub.

The triple opening of Marquee, Avenue and Koma in Singapore this year is the most ambitious expansion yet by Tao Group, which kicked off its venture here with the opening of restaurant and rooftop bar Lavo atop the MBS SkyPark in January last year. All four concepts coming here are the result of a partnership between Las Vegas Sands-owned MBS and Tao Group.

"Singapore has proven to be the robust heart and soul within Asia for us at Tao Group," said its co-founder Noah Tepperberg in a statement on Feb 22. "We are excited and humbled to play a part in shaping the future of Singapore's entertainment and dining landscape, and to bring about a thrilling integration of concepts for guests from Singapore and beyond."

The hope is for all three venues to "enhance Singapore's dining and nightlife scene", according to Las Vegas Sands' vice-president of global restaurant and nightlife development, Mr Patrick Lang.

"The launch of these concepts is part of the company's strategy to continually reinvest in our properties and to introduce innovative concepts and renowned global brands that will attract new and repeat visitors."