Good night: Those were the last words K-pop singer and actress Goo Hara, 28, posted on her Instagram account last Saturday (Nov 23), the night before she was found dead on Sunday.

Goo posted the message in Korean, with a photo of herself lying in bed, to her more than 1.5 million followers. The post has since taken on a new meaning following her death as fans offered their condolences.

"Rip (Rest in peace) going to miss u a lot. Like in ur last post good night and sweet dreams. May you be in a better place," one comment read.

It is as yet unclear how the South Korean singer, who had just completed a mini-tour in Japan from Nov 14 to 19, died.

Seoul police said they are still investigating her death after they found her motionless in her Seoul apartment at around 6pm on Sunday.

For eight years, Goo was a member of K-pop girl group Kara, which disbanded in 2016. Earlier in November, she released a solo Japanese-language single, Midnight Queen.

In May, Goo was hospitalised after a failed suicide attempt, following a public row with a former boyfriend, hairdresser Choi Jong-bum, in which each accused the other of assault. Goo also said he threatened to release sex tapes of the two of them.

At the time, the singer's manager found her unconscious in her apartment after he decided to check on her, as repeated phone calls to her went unanswered. 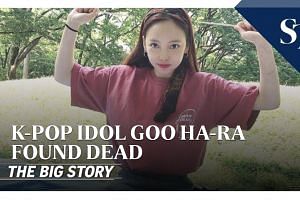 Why are K-pop stars susceptible to depression?

Before that, Goo posted several Instagram posts that dwelt on issues of betrayal and self-doubt.

One contained a messaged that said she appeared "fine on the outside, but it feels as if I am starting to break into pieces inside", while another simply read: "Goodbye."

Later, days after her hospitalisation, she apologised "for causing concerns and a commotion", vowing to "steel my heart and try to show up healthy".

In August, a court found Choi guilty of assault and of threatening to circulate the sex video, although Choi has filed an appeal.

On Monday morning, the hashtag #Punish_Choi_Jong_Bum, written in Korean, was the top trending topic on Twitter in South Korea, with fans blaming Goo's death on him.

Last month, one of Goo's close friends, fellow K-pop star Sulli, was also found dead at her home, in what is now largely believed to be a case of suicide.

The 25-year-old's fans, who believe that the young star was affected by online hate messages, have started a petition asking the government to mandate that netizens use their real names when they post comments.

Goo, who was in Japan, had filmed an apology for missing her friend's private funeral on Instagram Live.

"I'm sorry I can't go because I'm in Japan," she said. "I'm sorry that I had no other choice but to greet you like this. Live well up there, and do everything that you wanted to do. I will live hard and work hard for you."

The K-pop industry has in recent years been hit by several high-profile suicides, focusing attention on its associated lack of privacy, online bullying, relentless public pressure, and ill-treatment of celebrities by management agencies.

The Korean government has sought to introduce Bills to tackle cyber bullying, with The Korea Herald reporting earlier this month that some Bills have already been submitted to the National Assembly.

One calls for users to reveal their online user name and IP addresses when posting comments on online portals such as Naver and Daum, while another wants these portals to filter out malicious comments and block people from posting them.

South Korea has one of the world's highest rates of suicide, which - according to recent government figures - is among the top causes of death for those under 40.