NEW YORK (NYTIMES) - Gary Kurtz, who produced Star Wars (1977) and The Empire Strikes Back (1980), helping George Lucas create one of the most successful franchises in movie history, died on Sept 23 at a care facility near his home in London. He was 78.

The cause was cancer, his family said in a statement.

The work of a film producer can vary; some are little more than financial backers, while others are essentially partners in a production. Kurtz was emphatically the latter.

"I grew up in the school where the producer was just as much a filmmaker as the cameraman," he told The Star-Ledger of Newark in 2005.

Kurtz first worked with Lucas on his breakout film, the nostalgic coming-of-age comedy American Graffiti (1973), and later collaborated with him on the first two films of the Star Wars saga, which established Lucas as a major filmmaker.

"Gary's passing will be felt throughout the Star Wars family," Lucas said in a statement. "Through what were sometimes challenging shooting difficulties and conditions, his contributions as a producer helped bring the stories to life on-screen."

Kurtz and Francis Ford Coppola produced American Graffiti, which cost around US$775,000 (a little more than S$6.49 million in 2018 dollars) to make, and became a sleeper success that made tens of millions of dollars and was nominated for five Academy Awards.

During the filming, which was frenetic but completed on time and under budget, Kurtz and Lucas talked about making a very different kind of film: a space opera that broke from the trend of post-apocalyptic science fiction movies.

Kurtz was involved in the project from the beginning. He helped Lucas pitch the film to studios, scout locations, hire a cast and crew, and create dazzling special effects with a budget of US$10 million. 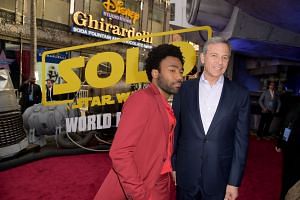 Kurtz said that shooting the film, at Elstree Studios in Hertfordshire, England, proved especially difficult because of technical issues and the crew's lack of confidence.

Star Wars was released in 1977 and became one of the most successful films of all time, earning hundreds of millions of dollars and winning seven Academy Awards, including a special-achievement award for the alien, creature and robot sound effects. It was nominated for best picture, an award that would have gone to Kurtz, but lost to Annie Hall (1977).

Star Wars also made major stars of Carrie Fisher, who died in 2016; Harrison Ford, who had also been in American Graffiti; and Mark Hamill, who in a post on Twitter after Kurtz's death called him "a lifelong friend" whose "contributions to cinema cannot be overstated."

After the success of Star Wars, Lucas and Kurtz began work on a sequel, The Empire Strikes Back, enlisting Irvin Kershner to direct while Lucas served as executive producer and wrote the story.

Kurtz joined Kershner in Europe for the filming, this time with a much larger budget. They faced serious challenges, including delays caused by an injury to Hamill, a studio fire that seriously damaged a set in England, and a blizzard on a glacier in Norway used as the setting for scenes on the ice planet Hoth.

The Empire Strikes Back was not completed on time and went over budget, costing more than US$30 million to make. It was released in 1980, to major box-office success but mixed reviews, although many critics now consider it the best film in the Star Wars series.

Kurtz's collaboration with Lucas ended shortly after Empire was released because of differences over the planned third film in the series. Kurtz later said he had objected to what he saw as Lucas' overly upbeat treatment of the story, which eventually became Return Of The Jedi (1983).

Gary Douglas Kurtz was born in Los Angeles on July 27, 1940. His mother, Sara (Briar) Kurtz, was an interior designer, painter and sculptor. His father, Eldo, was a chemical engineer and photographer.

He left college to work on films. His first credited work included serving as production manager on the Roger Corman movies Voyage To The Prehistoric Planet (1965) and Queen Of Blood (1966).

In the late 1960s, Kurtz served with the United States Marines in Vietnam, mainly as a photographer. After his service ended in 1969, he returned to the US and met Coppola through Corman's production company. Coppola introduced him to Lucas.

Kurtz's first two marriages, to Meredith Alsup and Roberta Jimenez, ended in divorce. He is survived by his wife, Clare (Gabriel) Kurtz; two daughters from his first marriage, Melissa Kurtz and Tiffany Hillkurtz; a son from his second marriage, Dylan; three stepsons, Corin, Dylan and Luke Howitt; and four step-grandchildren.

Kurtz's other films include Return To Oz (1985), an unsettling sequel to The Wizard Of Oz (1939) that more faithfully followed L. Frank Baum's novels, and Slipstream (1989), a science fiction thriller with Bill Paxton and Hamill as bounty hunters.

Kurtz may have left the Star Wars series not just because he disagreed with its direction. A few months before The Empire Strikes Back was released, he told The New York Times that what he really wanted was to make another sort of picture with Lucas.

"What I'd like to do is a story about two people on a picnic in the country with no special effects or robots or wind machines," he said. "I'd like to. But we won't."

Kurtz was right. The next film he produced was Jim Henson's The Dark Crystal (1982), a fantasy cast entirely with Henson's puppets.